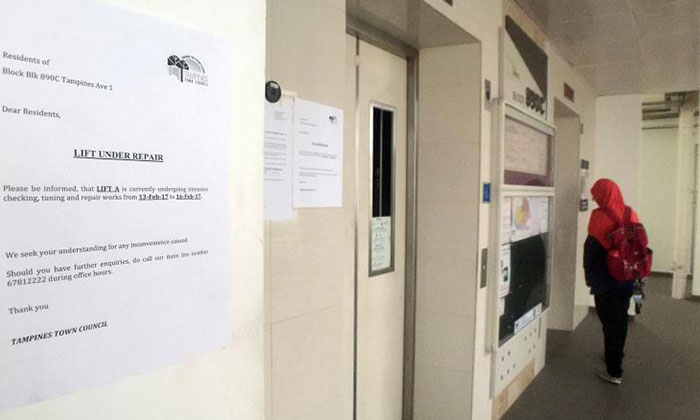 A 20-year-old Singaporean man sustained knee injuries after lift A in Block 890C at Tampines Avenue 1 went out of control, rapidly ascending to the 14th storey before plunging to the fifth last Monday (Feb 13) at around 11.30am.

The man was allegedly going home from his friend’s house and boarded the lift on the sixth floor before it spiralled out of control, reports Shin Min Daily News via Lianhe Zaobao.

He recalled his terrifying experience:

“No matter how I pressed the buttons, there were no reactions from the lift.

“I was shocked to see the lift ascend instead of going down after I pressed the button for the ground level.

“I tried pressing the ‘open’ button but the doors did not budge at all.

“I was scared out of my wits.

“When it finally landed on the fifth storey, there was a loud thud.”

According to the victim, after the lift went out of control, he closed his eyes and held on to the railings.

When the lift finally came to a stop, he opened his eyes and dialled for help:

“I realised then that I had injured my knees from knocking the railings, and went to the hospital to seek treatment.”

The Tampines Town Council is currently investigating the matter and has stopped the operation for said lift.

Related Stories
Want to take the lift at Tiong Bahru View? You have to get past this 'waterfall' first
Is this... the garbage lift at Blk 72 Circuit Rd?
Sumang Walk resident shocked to see block lift's control panel left open
accident
lift
Tampines