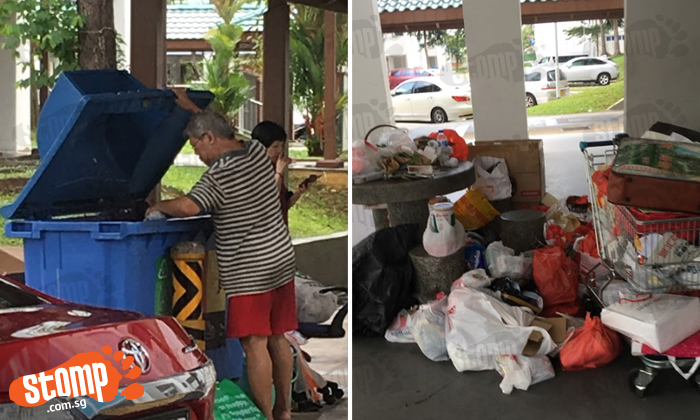 Stomper Isabelle is seeking help to deal with a man who, for years, has been picking up trash from rubbish bins and chutes, and leaving the collected rubbish lying all around, stinking up Block 164 Tampines Street 12.

"The man has a foul temper and would yell at people. Not too sure why either.

"In the daytime, he digs into multiple rubbish bins and chutes, include recycling bins.

"Then he leaves the collected rubbish lying everywhere at night (corners, behind pipes, staircase, also hides some in rubbish bins).

"Come morning he will gather the rubbish again and repeat the routine.

"He changes the 'hiding place' quite frequently. When he has food scraps, he feeds the pigeons."

According to Isabelle, because of the collect trash, the whole block tends to be smelly and unsightly.

"It was mentioned to MP Mr. Masagos when he did his rounds some time back.

"But this man's actions has not changed at all. Even when the block cleaners drive the 'cart' past him, they did not attempt to clear the piles of rubbish."