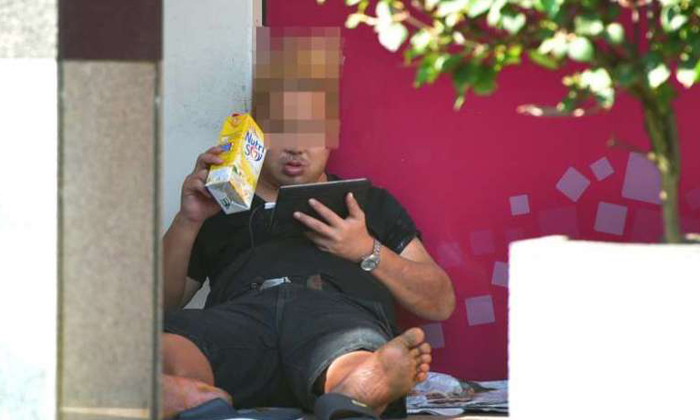 A 35-year-old man has allegedly been living at Jurong Point shopping mall for nearly four years, using the water, electricity and Wi-Fi there.

Mr Chen Jinfu, who works at an electronics factory, makes his "home" outside the mall, along walkways or at staircases there, Lianhe Wanbao reported on Monday (Jan 16).

Wanbao visited the mall in Jurong West and found him sitting on some newspapers, watching a show on his tablet device while drinking soya bean milk and eating bread.

He told Wanbao that he rents a shared room in Boon Lay, but finds the room hot and stuffy, saying he prefers to live at Jurong Point as the $250 room was "no good" and he could not get along with the other tenants.

He added that it was cooler at Jurong Point, which is open late and has a 24-hour supermarket, and that he could use the free Wi-Fi and was able charge his phone at the mall.

A spokesman for Jurong Point told The Straits Times it welcomed Mr Chen as long as he did not pose a nuisance.

"We're heartened that shoppers enjoy using this facility," she said, referring to the complimentary Wi-Fi the mall began offering in 2015. "If Mr Chen Jinfu uses our facilities in an appropriate fashion without posing any nuisance or threat to the mall's security, we warmly welcome him like any other shopper."

Mr Chen, who is from Ipoh in Malaysia, has worked in Singapore for more than 10 years and currently earns more than $1,000 a month.

He claimed that he has never been chased away, and said he has seen others loitering in the area like himself.

When asked why he rented a place even though he preferred staying at Jurong Point, Mr Chen said that he needed a residential address for his employment pass.

To maximise his savings, Mr Chen goes to Johor nearly every weekend to buy daily necessities.

He visits his retired parents in Ipoh only once a year during Chinese New Year as it is "not cheap to travel there".

Mr Chen is apparently not the first to seek unconventional lodgings. Two weeks ago, there were reports of a woman who lived in Changi Airport while renting out her three-room flat.