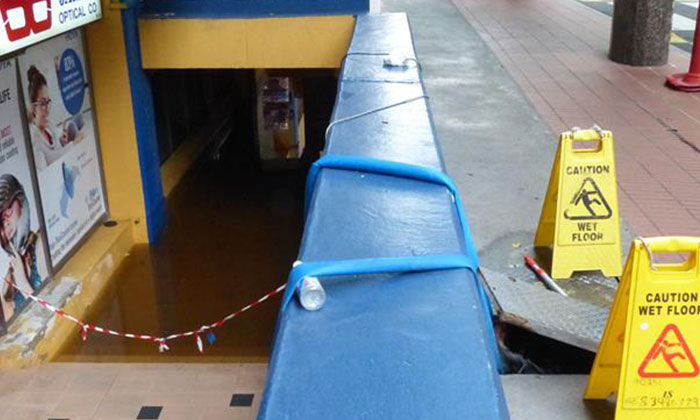 The basement of Katong Shopping Centre was mysteriously flooded on Feb 13 despite there being no rain, affecting the business of about 10 stores.

According to a stall owner, water started pouring in at around 11am, and the water level had risen to their ankles.

The flood subsided around 2pm, after the sanitation department was called in reports Lianhe Wanbao.

“We have been based here for more than 10 years, but this is the first time that such a thing happened.

“Some elderly patrons even slipped.”

A boss from an eatery even bought her employees boots so they could continue working despite the flood, but told reporters that business was down as much as 50 percent.

“Our entire kitchen was flooded, although we were lucky that the ingredient were placed higher than the water level.”

The eatery which had no walls and operated al fresco style was among the most badly affected stores.

Unwilling to see her employees work with their feet wet, the kind boss forked out S$120 to purchase boots for them.

The exact cause of the flood is still under investigation, although a spokesperson for the shopping complex has clarified that it was not due to a busted pipe.