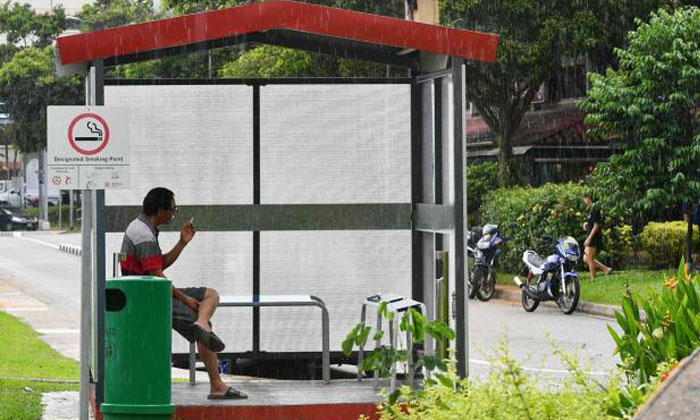 Although smokers will not be penalised if they light up outside these designated points, they are encouraged to use the 3m by 3m smoking corners, which come complete with a roof for shelter, benches and dustbins with ashtrays.

Eight more such points will be built for residents moving into new flats by the end of this year or next year, depending on when they collect their keys, said Nee Soon GRC MP Lee Bee Wah at the launch of the smoking points yesterday.

Said Ms Lee, MP for the Nee Soon South area who is also chairman of the Government Parliamentary Committee for the Environment: "The smoking points are a win-win solution. Non-smoking residents said they reduced the amount of second-hand smoke they have to endure ... Cigarette butt litter was also reduced significantly."

Ms Lee had said earlier this month that second-hand smoke is also a problem for residents living on lower floors and above coffee shops.

Most of the smoke from every cigarette ends up as second-hand smoke, which has at least 400 poisonous chemicals and can cause respiratory tract infections, heart disease and cancers.

The smoking corners started with an initial six, built by the Nee Soon South ward in 2014. It was expanded after feedback from residents.

One resident, Madam Lee Eng Yok, 83, said: "It's good that there's somewhere for them to go to smoke, and we won't have to breathe in second-hand smoke."

In all, the project cost an estimated $500,000, paid for by private donors, including corporations and individuals.

On whether the programme will be rolled out in the entire Nee Soon constituency, Ms Lee said such ground-up initiatives depend on community support, but that it was encouraging to see similar smoking points set up in Orchard Road.

Resident Joe Poh, 44, who smokes, said he sometimes uses the designated points, although he added that it is inconvenient to get to when it rains because of the lack of sheltered walkways.

Mr Poh, a supply chain executive, said: "The initiative is good, but without enforcement, there are still many others who do not use the points."

Related Stories
Aren't these kids way too young to be smoking?
Don't you know this is a non-smoking area?
Uncle, the bus stop is not a smoking point
interesting
unusual
cool
smoke
smoking
nature
environment