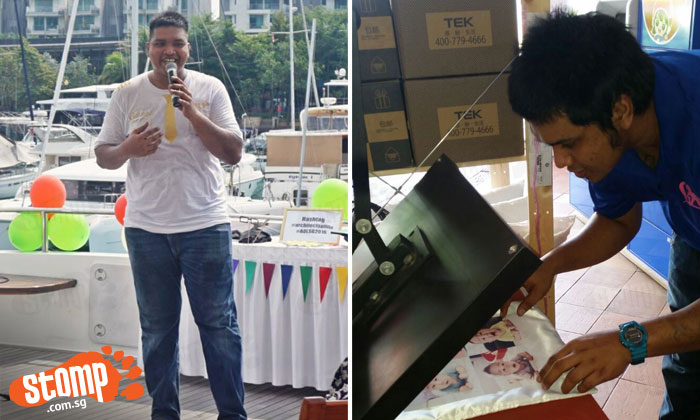 Standing at 1.95cm, you might be intimidated by ex-convict Rahmad Sidek -- but his huge smile and effervescent nature will quickly erase that.

Despite his tough past, the 29-year-old has a zest for life that is infectious.

Rahmad has been out of the Singapore Boys' Home since he was 14 years old for theft and delinquency before serving his National Service (NS).

His troubles did not stop there.

"People finish their NS in two years, I finished in three," he said explaining how he had to serve longer due to his time in the detention barracks.

He then went in and out of jail for drug-related offences, first serving a 12-month sentence before coming out, relapsing and being sentenced for another 18 months.

Some may think that a leopard never changes its spots but Rahmad was determined to change his life and he owes it to Architects of Life, a professional youth services agency specialising in youth consultancy, training and programming.

They were conducting a highly selective programme where 40 inmates had applied but only less than 20 could be chosen.

Rahmat stood out, not just for his huge frame but also for his enthusiasm.

His mentor, Mr Glenn Lim, founder of Architects of Life, said that initially, there were doubts on whether Rahmad could complete the programme to their satisfaction owing to his setbacks like language and not being contactable after being released from prison the first time.

However, he passed through everything with flying colours.

"Time and again, he has proven us wrong. He has proven that if you believe in the individual and continue to be unwavering in the support, it doesn't matter what one goes through," Mr Lim said.

"We are all very proud of him. I'm reminded not to judge people based on their appearances, he is a symbol for what we stand for."

Through encouragement from his mentors and with the support of his friends, Rahmad explored the idea of setting up his own business.

Despite being a PSLE dropout and having no design or business experience, Rahmad has been running his own home business, Giants' Custom Design and Apparels since November, 2016 where he prints jerseys, class T-shirts, tote bags and caps among other products.

"It wasn't easy having no business experience and having to take care of loans and orders by myself but I am doing okay now," Rahmad said.

"I really enjoy what I do and the struggles I encounter in business just make me push myself harder."

The confidence he gained from the Architects of Life programme has made him fearless in growing his business.

"I can just go up to anyone and strike up a conversation and talk about my business," he smiled.

As for the naysayers, he has this to say:

"Society keeps condemning us but that makes me boost myself up and prove myself."

Apart from growing his business, Rahmad wants to give back to society by doing volunteer work and mentoring at-risk youths.

He has been invited several times by Architects of Life to share his life story.

"I want them to know my journey and know that it's not worth it.

"I want to inspire others out there that no matter what other people say, ex-convicts can do better in life with their experience, only their mindset needs to change."

Watch him tell his story in the video below.