Motorists to the rescue after car overheats, forcing driver to stop near Tuas checkpoint 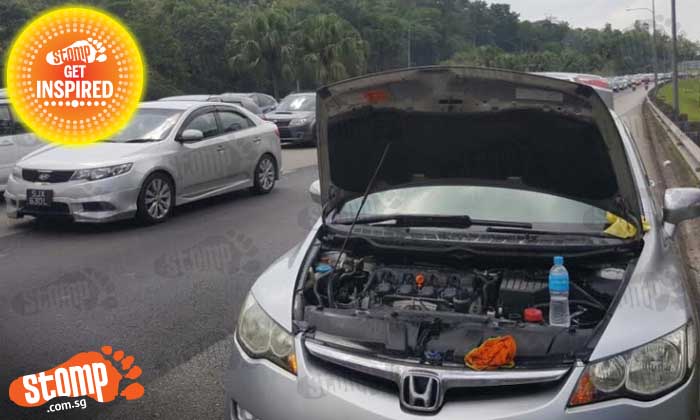 Many motorists dread the long jams we face at the checkpoint during our trips across the causeway.

Now imagine having your car breakdown smack in the middle of all that congestion.

It is a driver's worst nightmare, which might be why so many people rushed to help Stomper AC when he faced such a situation yesterday (April 30) at 11.30am.

He was driving towards the checkpoint when a fellow motorist wound down his window and pointed at his bonnet.

AC then realised that there was smoke coming out of the engine compartment, so he stopped his car by the side of the road.

AC and his passenger, a friend of his, realised the car was overheating.

However, many passing motorists stopped to help him.

Some offered advice, and others offered water to make the engine cool down.

"Even some motorists on the outer lanes wound down their window to ask if we needed water, and my friend was running between lanes to get it from them.

"Eventually we managed to get the car working again.

AC then tried to ask motorists if he can cut into their lane so that he could go the long way around to U-turn back.

However, a couple advised him to use the bus lane and inform the checkpoint staff so that he could make the U-turn quickly.