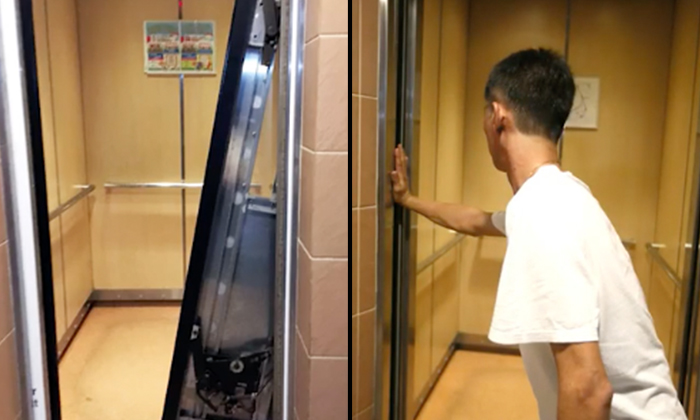 When a lift at a block in Geylang Bahru broke down, a helpful mechanic decided to step up, breaking into the lift and freeing three residents trapped within.

The lift had broken down as it was descending from the 12th storey, leaving the three passengers trapped for about half an hour.

The 38-year-old mechanic said that on the day of the incident, he was on the way back home from a clinic, and waiting for the lift at the ground level.

It then descended to the 8th storey and was again stuck there for about five minutes and then the 5th storey, where it was stuck for another five minutes.

The mechanic said that there were two other residents waiting for the lift with him, and a girl who got impatient left first.

“When the lift reached the ground level, there were two men and a woman inside, but when we tried pressing the ‘open’ button, the lift doors moved a little but wouldn’t open.”

He said that although the inner doors moved a little, leaving a small gap, they became jammed after that.

Assessing the situation, he reached his hand into the gap and managed to pry open the doors, by pushing the left inner door while one of the male passengers pushed the right inner door.

With the combined might of the two, the lift doors finally opened after five minutes and the three inside the lift were freed.

The mechanic said that having lived in the block for over 10 years, it was the first time he had encountered a lift breakdown.

Some residents pointed out the the affected lift was a new lift which started operating about three to four years ago.

A spokesperson from Jalan Besar Town Council said that inspection from technicians revealed that the incident was caused by a misalignment between the left and right inner doors of the lift.

The spokesperson also added that the town council would closely monitor the lift.

Related Stories
Kudos to kind resident and SCDF for helping to free woman who was stuck in condo lift for 1 hour
People's Park Complex residents plagued by lift breakdowns, sometimes waiting up to an hour for one
Pinnacle@Duxton residents stranded after lifts failed: Some had to climb 20 flights of stairs
neighbourhood
lift
faulty
hero