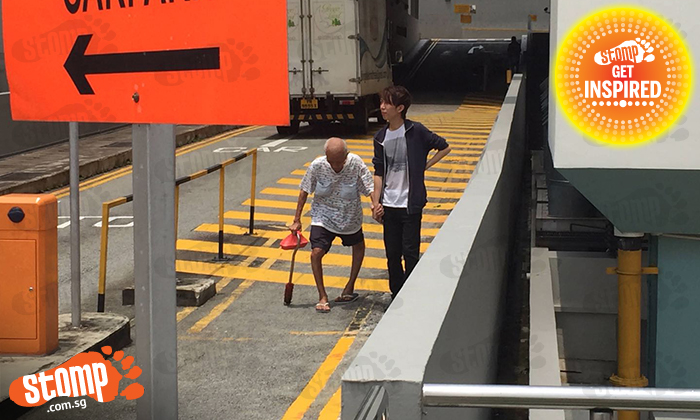 Stomper Mevius was touched when he saw a young man go the extra mile to help an elderly uncle who was having trouble moving around.

The incident happened at around 1.30pm yesterday (Mar 31) at a hawker centre on the 4th floor of Beauty World Centre.

According to Melvius, the old man’s knee was clearly in bad shape and he had trouble walking.

As the young man was passing by, the old man called out to him to lend him a hand, and he agreed.

Together, the two proceeded to leave the hawker centre, with the young man supporting his companion.

They moved at a very slow pace.

About 30 minutes later, Mevius once again spotted the pair as he was leaving Beauty World Centre.

The two were walking towards the taxi stand, where the youth eventually helped the old man onto a cab before leaving.

“Kudos to this young man, who put aside everything to help, and for being patient and civil minded, even though he was perspiring so much due to the hot weather.

“He persevered in order to bring the elderly man to the taxi stand.

“We need to instil values like these into the younger generations.

“Hopefully, we can see more of these kind acts around.”