Youtuber gets over 6 million views for counting from 1 to 100,000 in one take 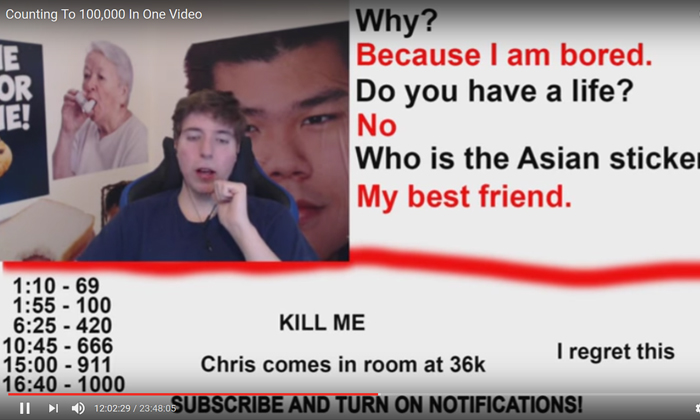 Have you ever wondered how long it would take for you to count from 1 to 100,000 out loud?

A Youtuber has found the answer - 37 hours.

Before his viewers could ask why, MrBeast wrote the answer in the video clip itself: “Because I am bored.”

In the video, right before he starts counting, MrBeast writes: “This is the most i’ve ever tortured myself.”

He also adds, “Think of the pain I’m about to go through.”

He then proceeds to count the numbers in increasingly exaggerated expressions of boredom. He even tries to timestamp his counting milestones, but gives up after he counts to 1,000 at 16min 40s.

According to MrBeast, who has over 584,000 subscribers on Youtube, the original video file was 37 hours long, but he had to speed up parts of it as his editing software was unable to export files longer than 24 hours.

His video has now garnered more than 6 million views on Youtube.

Watch MrBeast count (and suffer) in the video below!

Related Stories
Youtuber jumps from roof and misses pool in crazy stunt, shattering his feet
Singaporean YouTuber makes video on how to order economy rice like a pro
Evil gift-wrapping trolls that will help you lose your friends this Christmas
youtube
youtube video
youtuber
funny