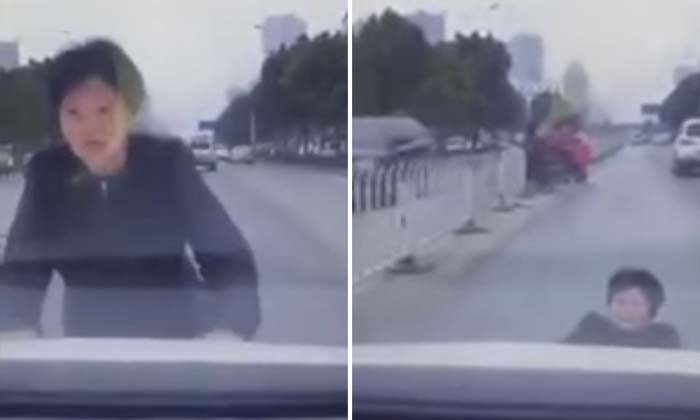 In life, most of us would reach a point where we would do quite a lot to get a bit of extra cash, like helping your dad wash his car, or selling unwanted items on Carousell.

One woman in particular, from the city of Nanyang, China, decided to try the fake accident scam to earn additional money, The Lad Bible reports.

In the video below, the woman is first seen running towards an oncoming vehicle, before placing both hands on the car and falling backwards.

The woman is then seen doing 'sit-up's, where she slightly tilts her head up, waiting for the driver to come out of his vehicle and attend to her.

After realising that the driver did not fall for her act, the woman sheepishly gets up and walks away.

The fake accident scam is a popular fraud in China, where pedestrians run in front of cars so they are hit at a slow speed, before pretending to be injured, and asking for insurance money.

The scam derives from the Qing Dynasty, when a person would dress up as a nobleman, carrying lots of expensive looking china in a crowded place.

The nobleman would then wait for someone to knock into him, drop the porcelain and then ask for money.

The act of doing this is actually called 'pengci', which translates to 'touch porcelain.'

Bless her for trying though.

Related Stories
Man takes off beggar's pants in China and reveals...
Don't fall for this! Elderly duo lose $26,000 in 'apple scam'
Beware of these 20 most common scams when travelling!
fake
accident
car accident