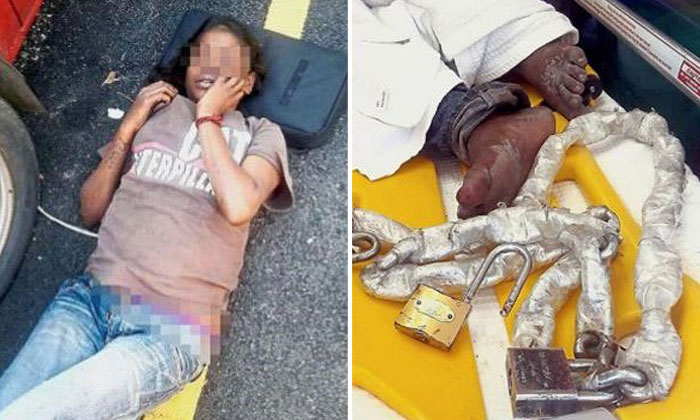 Residents living near the Serdang Raya 3k complex building in Selangor, Malaysia were in for a shock when a woman bound in metal chains and locks was seen squatting by a roadside yesterday (Jan 22).

Passers-by spotted the woman at around 10am near some parked cars.

According to The Star via AsiaOne, the woman in her 20s was freed by a team of police and firemen.

However, little is known about how she ended up like that.

The Star tracked down the woman's address to a house about five minutes drive from where she was found.

The house was found empty and looked abandoned where its window panes were broken and its front yard had been overgrown with weed.

An elderly man was found tending to some chickens in the backyard and told the reporter that he had gotten permission from the house's owner to rear his chickens there.

"The family who rented the house had moved out."

Another neighbour who claimed to recognise the woman from a photo said that she was a victim of alcohol abuse:

"She is a drunk. I still remember the day when she was once found walking naked in the streets after drinking one night.

"She used to stay in this rented house with her husband and three young children until he couldn't take her addiction anymore and divorced her."

The house has been abandoned for about a year and the woman is said to have worked at a factory nearby.

"Investigations revealed the victim was set free by firemen and was taken away by her elder brother. "We have not been able to get any details on the identity of the victim or on the case. "We urge the victim, her elder brother and the firemen involved in freeing the victim to come forward," he said, adding that no report had been lodged on the incident so far."

Related Stories
92-year-old woman locked in a pigpen for years by her son and daughter-in-law
Graphic: Malaysian boss starves, beats and burns employee with exhaust pipe for failing to meet sales target
Chinese mother locks crying infant in dog cage to play Mahjong in peace: "I just put him in there for a while"
abuse
mystery
Malaysia