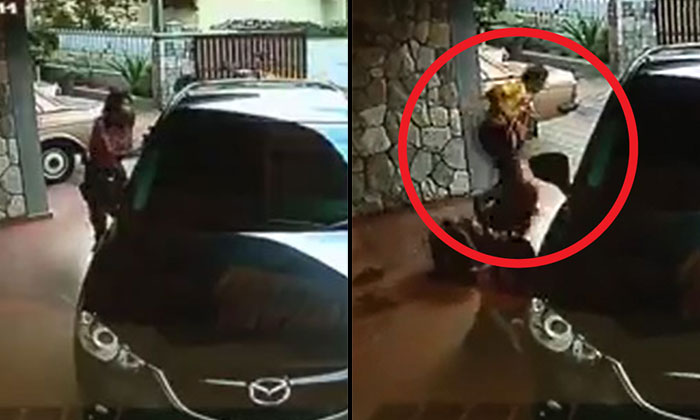 For those who do not have a habit of closing their gates the moment you alight the vehicle, this video may change your mind.

Recently, a CCTV footage made its way online, showing a man deftly sneaking onto the front porch of a woman in Malaysia, and wrestling a purse from a house owner.

The incident reportedly happened on Jan 31, in a housing area in Kampung Tunku SS1, Selangor, Malaysia, reports The Star Online.

In the video, two ladies - the house owner and a companion - got back home but left their automatic gates open while they were busy exiting the car, unaware of a suspicious car that had been tailing them.

The suspicious vehicle followed the house owner’s vehicle onto a junction, slowing down and passing the house by, before driving back into the frame once again.

In a spilt second the car appeared in front of the gate, a man in a yellow shirt exited, rushed into the porch while narrowing avoiding the closing gates, and grabbed a handbag from the house owner and her companion, pushing her onto the ground.

A police report was lodged the same day at the Seapark Police Station, and OCPD Assistant Commissioner Mohammad Zani Che Din has confirmed the incident, citing that the case is currently under investigation.

Related Stories
Netizens spot "Malaysia's Most Handsome Thief": He stole RM 15,000 worth of iPhone 7s
Thief turns violent after breaking into East Coast home and gets chased by maids -- but is stopped by heroic passer-by
Enter The Dragon: Man gets his stolen phone back by kicking thief off moving motorcycle
snatch thief
Malaysia
crime
Selangor