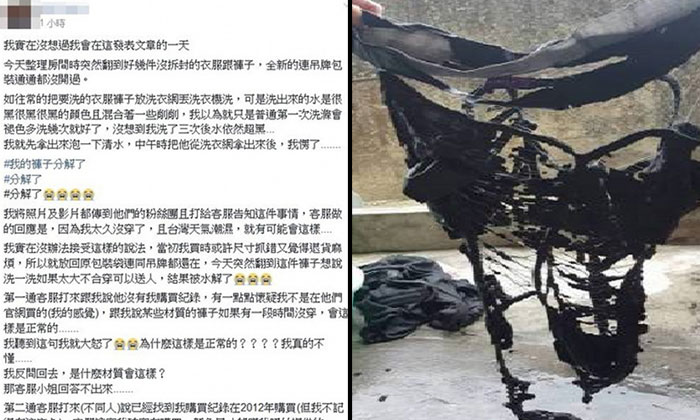 A Taiwanese woman was at a loss for words when her pants seemingly dissolved while she was washing them.

Apparently, she was doing some spring cleaning when she found a pair of denim pants she had purchased some time prior, still in its package.

She decided to wash them first before wearing them but to her shock, the pants simply dissolved, reports World of Buzz.

She then took to social media to share her experience.

“Before washing, I put the pants into a washing net and threw it into the washing machine.

“But after the cycle stopped, I inspected the water and found that it had turned murky and inky, plus there were some threads.

“Thinking that it was normal, I continued washing it a few more times.

“After the third time, I took it out and realised that the pants had dissolved.

“What’s more, the pants were from a reputable store.

“I contacted a sales representative to ask what kind of materials the pants were made of, but she could not give me an answer.

“I tried contacting the company again, and they told me that my pants were made from denim material and found my proof of purchase dating back to 2012.

Ever since uploading her post, many netizens have commented on the incident.

Some expressed shock while others found the situation hilarious.

Watch a video of the incident below.