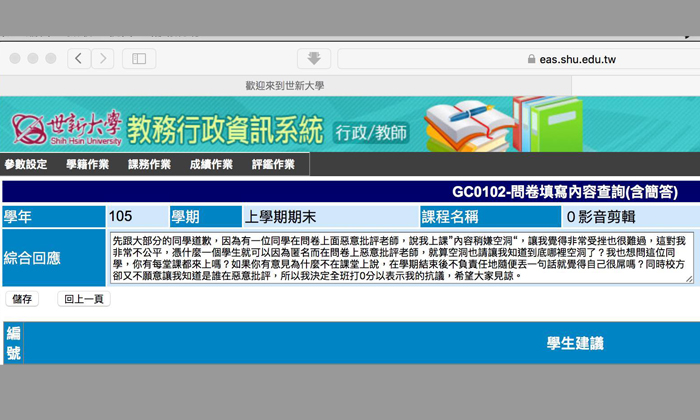 A teacher from Taipei’s Shih Hsin University has sparked outrage amongst the Taiwanese community for refusing to release the grades of all 150 students in his class after he received negative teaching feedback.

In a series of screenshots posted by a Taiwanese Facebook user yesterday (Jan 17), the unnamed teacher, believed to be from the Broadcast department at the private university, writes in Chinese on Facebook:

“I’ve decided to force the school to tell me the identity of the student who said my teaching is ‘lacking’. I want him to come and apologise to me, and I will grade him with a score of 0.

“Otherwise, I will not release any results, and I will refuse to teach next semester!”

In a message on the class announcement board, the teacher also writes to the students:

“Let me first apologise to the majority of my students. During the final exam, one student wrote on the paper ‘Content is slightly lacking’.

“This led to me feeling extremely frustrated and sad. This is extremely unfair to me.

“What right does a student have to attack a teacher with such hurtful words just because the feedback is anonymous? At least let me know how my content is lacking!

“I really wish to ask this student, did you attend all of my classes? If you had any problem with the content I taught, why didn’t you raise it up in class instead of just throwing it at me so carelessly at the end of the semester?

“At the same time, the school refuses to let me know who the culprit is, so in an act of protest I have decided to give everyone in the class a zero grade. I ask for everyone’s understanding.”

There are two more screenshots of the teacher’s Facebook status.

In the first one, the teacher posts the image of the feedback that was submitted and says:

“Lacking? Your brain is empty… Out of 150 students you were the only one who said it is lacking… If you have the guts to, come out and say it! Shih Hsin has such classless students… After next semester’s classes end, I will never teach at Shih Hsin again!”

In the next screenshot, he says:

“He is not the one at fault. Isn’t it easier to just get the student to come apologise to me?

"It’s so frustrating that all the students are coming to me asking about their grades now.”

The teacher’s behaviour has drawn flak from Taiwanese netizens, with many saying the teacher has a “glass heart” and criticising the way the teacher handled the feedback. Others questioned how the teacher had been able to get his position in the first place.

One commenter, a teacher himself, points out:

“If your content is lacking, then you need to fix that!”