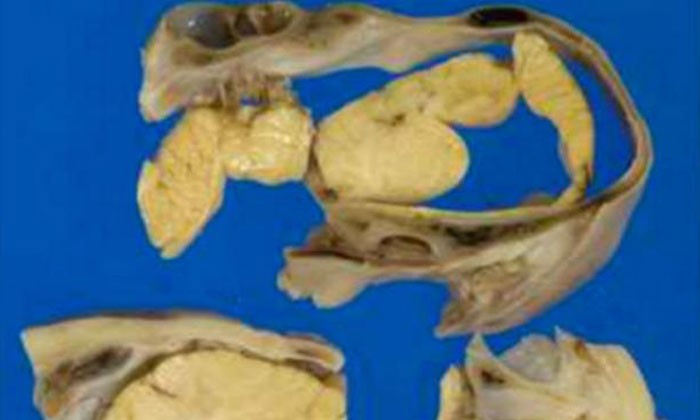 Surgeons in Japan made an unusual find while performing a routine procedure on a 16-year-old girl.

During surgery to remove her appendix, they discovered a 10cm-wide tumour in her ovary, they wrote in a paper recently published in the medical journal Neuropathology.

New Scientist reported that clumps of hair and a structure that resembled the cerebellum and brain stem were found inside the growth.

It was later identified as a teratoma, a type of tumour made up of germ cells which can develop into any cell in the body.

According to the American Cancer Society, there are two types of germ cell tumours - mature teratoma (benign) and immature teratoma (cancerous), which are often diagnosed in women of childbearing age.

The girl's benign tumour was surgically removed and she has recovered well, the paper said.

Masayuki Shintaku from Shiga Medical Centre for Adults, who studied the tumour, said that though brain cells are often found in ovarian teratomas, it is rare for them to develop into proper brainlike structures.

Although the teen did not experience any symptoms, there are reports of other patients with the same condition developing neurological symptoms such as personality changes, paranoid thoughts, confusion, agitation, seizures or memory loss.

In 2015, a young woman in the United States struggled to understand the world around her as a teratoma grew in her brain.

The tumour containing bone, hair, and teeth, was removed via surgery.