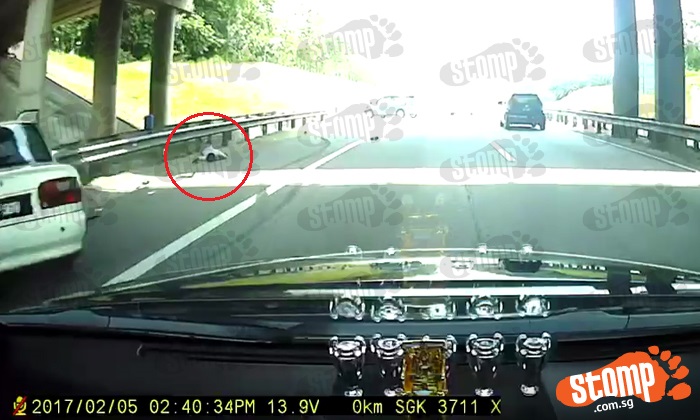 Stomper George was on his way back to Singapore from Johor Bahru with his wife when he witnessed a tragic accident that left one driver dead on Sunday afternoon (Feb 5).

In the videos he submitted to Stomp, George’s car is cruising down the North-South Expressway in Malaysia, towards Singapore, when a grey car appears on the right of his vehicle and weaves dangerously through the traffic on the expressway.

The driver then seemingly loses control of his car and crashes into the side of the expressway, where a white car is stationary on the road shoulder.

When George’s vehicle passes by the accident scene, the driver of the white car can be seen lying motionless on the ground.

Debris can be seen strewn all over the expressway.

The Stomper then pulls over on the road shoulder.

According to the Stomper, the driver of the white car was standing outside his vehicle, which had apparently broken down, when the grey car plowed straight into him.

“The reckless driver didn’t even take the initiative to call for the ambulance or the police.

“He was busy checking on his own car and the damages it had sustained.

“I had to stop at the road shoulder near to the accident to flag down passing Malaysian vehicles to call for an ambulance.”

He added that there was a family of five inside the grey car, including an infant. They remained inside the car throughout the incident.

George said medical assistance arrived around half an hour after the accident happened, and the white car’s driver was pronounced dead at the scene.