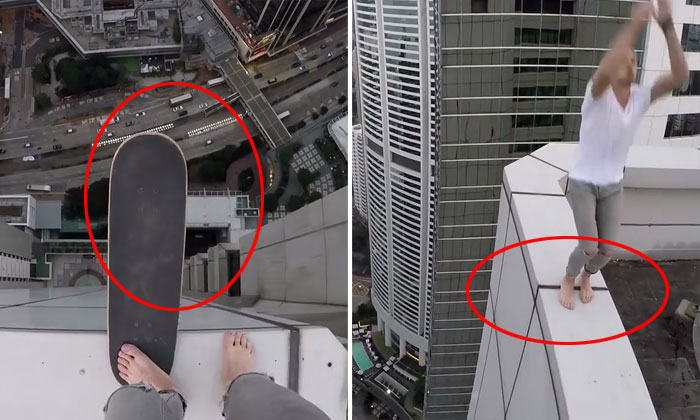 The Russian daredevils have struck again in Hong Kong -- but this time the news has reached the local police and investigations are on going.

The chilling video was uploaded by Oleg Sherstyachenko (aka Oleg Cricket) to his Instagram and YouTube accounts sometime last week, and has gathered over 1 million views and 500,000 views respectively. The minute-long footage features the daredevil doing some near-edge somersaults and shenanigans atop a Hong Kong skyscraper -- and as if that is not enough, he even lies down on his skateboard and pushes himself along the edge of the skyscraper. Oh, and with no safety equipment of course.

According to a report by Shanghaiist, Oleg claimed the stunts were part of a promotional "collaboration" with UK watch company Circulr.

Check it out below:

While Oleg's stunts impressed his fans -- the Hong Kong police were not.

In fact, the report mentioned that they have opened up an investigation to check if the Russian broke any laws during his time on top. Which seems pretty likely.

If you listen to the audio closely, you will hear someone speaking in Cantonese -- saying that they will call the cops should he not get down from there.

Police in Hong Kong and other major cities in mainland China are losing an extended war against Russian rooftoppers who visit their skyscraper-filled country, evade security, climb tall buildings, and then produce terrifying videos about their experiences.