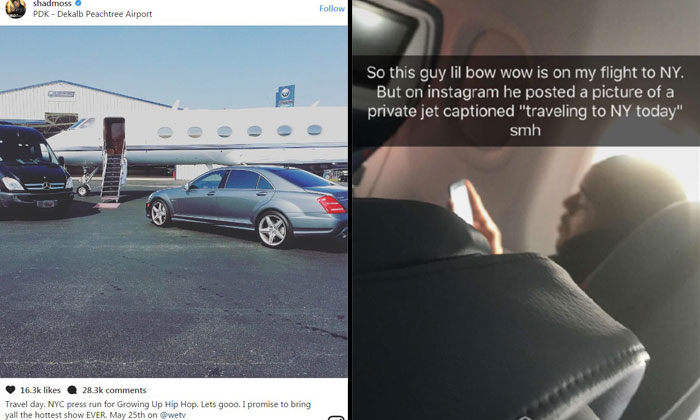 We'll admit it, our social media personas can sometimes make our ordinary lives appear more exciting than it really is.

But when a famous person not only tries to do the same but completely alters his reality, you can bet the Internet will be less forgiving.

Enter rapper Bow Wow (born Shade Moss and formerly known as Li'l Bow Wow), who is once again in the limelight for all the wrong reasons.

Here's how it happened.

On Monday (May 8), the rapper-turned-actor uploaded an Instagram post of a private jet in an airport hangar.

Except, he wasn't actually travelling on a private jet, but on a commercial flight.

Unfortunately for him, Bow Wow's lie was outed a day later by fellow a passenger, whose Snapchat roast made it to Twitter and subsequently went viral.

Bow Wow addressed the controversy on May 10 in an Instagram Live video, while still keeping the original post up.

Seemingly unbothered, he claimed that the image of him flying commercial was actually an old photo, stating "that ain't news, what's there to talk about?".

However, Internet sleuths uncovered striking similarities between his post and a photo on the website of a Florida-based transportation service company.

In return, the Internet has responded with the #BowWowChallenge, which sees social media users posting hilarious images of themselves seemingly living in the lap of luxury, but then revealing the sad reality.

Lesson learnt? Not everything online is what it seems.

According to News.com.au, this is not the first time a famous person has been slammed for flaunting his wealth and assets online, real or make-believe.

American rapper 50-cent was scolded by a judge last year for frequently posting photos of massive wads of cash. That may be fine and dandy, except that he was also filing for bankruptcy at the time.

In Singapore, celebrity hairdresser David Gan was flamed in 2014 for posting a photo on Instagram of his Hermes Birkin bag filled to the brim with stacks of Chinese yuan. The post led to an online war of words between Gan and critics who accused him of showing off.

Related Stories
Woman gets slammed for putting on fake accent and claiming that she has 'soooo much mix'
Netizen inadvertently becomes online celebrity after failing to check selfie before posting on Twitter
Woman says she can repay man she borrowed $184 from after 1 year -- but can do botox, go clubbing and visit Europe
entertainment
Hollywood
Bow Wow
fail
instagram
social media
meme
rich
luxury
funny