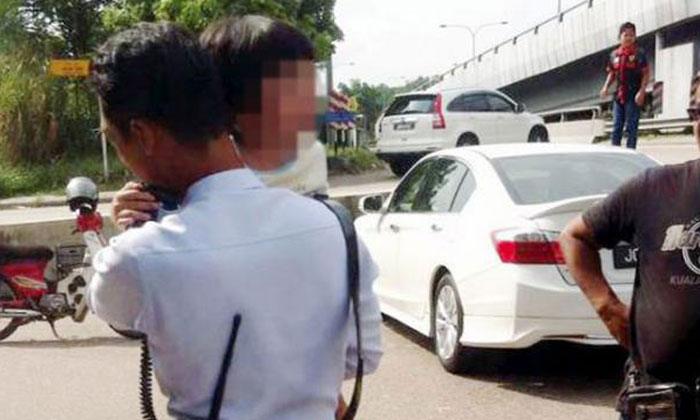 Police had to shoot at the tyres of a car driven by a man in an attempt to stop him after he fled because he was driving with an expired driving licence here.

Seri Alam OCPD Supt Johkiri Abdul Aziz said the 27-year-old man, who works as a cook in Singapore, was driving with his three-year-old son and 37-year-old girlfriend in the car in Ulu Tiram town, near here, at around 11am Wednesday.

"The suspect was ordered to stop by two policemen on duty as he had been using his mobile phone while driving.

"Initially he obeyed the instruction but then decided to speed off," he said in a statement.

Supt Jokhiri said the policemen had to chase after the suspect.

During the chase, the man rammed into several vehicles parked along the roadside and even tried to run over a policeman.

He added the suspect then hit another policeman's motorcycle, forcing the officer to escape by jumping off the machine.

Police then shot the tyres of the car, causing the vehicle to plunge into a drain.

"Our man had to open fire because the suspect not only was a danger to the policemen chasing after him but also the public," said Supt Jokhiri.

He said the suspect was detained and initial investigation showed that he had a record for robbery and drug-related offences.

Supt Jokhiri urged the public to refrain from spreading false information on social media that the case was related to child abduction.