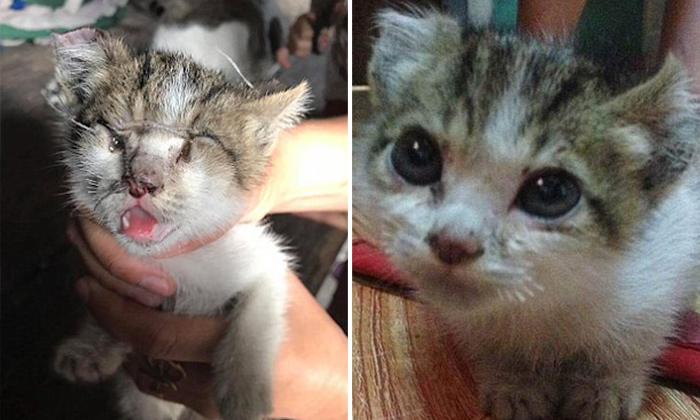 In the video, the kitten’s eyelids, ears and nose appeared to have been sewed shut by stitches and was clearly in distress, meowing loudly even as the kind woman was removing the threads, reports World of Buzz.

According to Leonara, she had found the poor kitten in an alley in Manila, Philippines on Feb 14.

When she first found the kitten, it was stumbling around and upon closer inspection, Leonara realised that someone had sewed shut various parts of the kitten.

The kitten was apparently bumping into various obstacles as it had no spacial awareness due to the loss of its sight and hearing.

Unwilling to let the kitten suffer anymore, Leonara brought the kitten home and attempted to remove the threads with a scissors.

“The poor kitten was in pain.

“It was so hard to take out all of the stitches.

“She was screaming and meowing because removing the stitching hurt so much,  but doing so was the only way to save her life.”

After removing the threads, she then decided to adopt the kitten and named it ‘July’.

Jonil Manatad Novela, Leonara’s 21-year-old niece said that she believed the perpetrator may have struck over a week earlier as the wounds on the kitten have already begun to heal.

“July is doing well now and seems to be having a good time with other stray cats that my aunt has taken in.

“We don’t know who did this.

“We can only assume that it’s some kind of psychopath.

“Who else could do this to a defenceless kitten?

“They are sick, useless and heartless people.”