Oh no they did not! Selena Gomez and The Weeknd spotted kissing -- and his ex Bella Hadid is not too happy about it 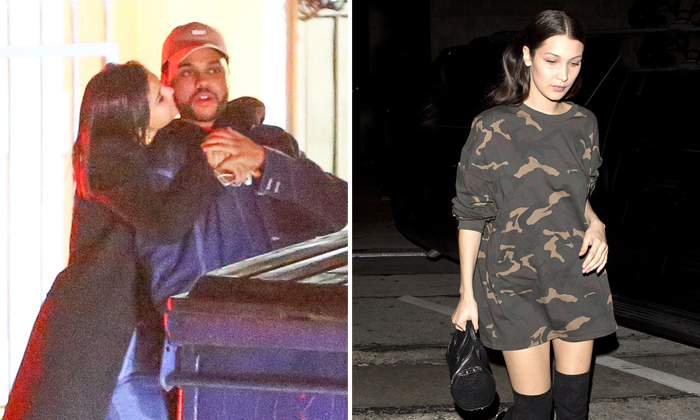 The 20-year-old model reportedly stopped subscribing to the 'Heart Wants What It Wants' hitmaker's photo feed after pictures emerged of her kissing Bella's ex The Weeknd, Bang Showbiz reports.

The loved up pictures of the pair making out behind a garbage can outside Italian restaurant Giorgio Baldi in Santa Monica have been making the rounds on social media throughout the day.

Of the pair's relationship, a source said:

"At first, Selena and Abel wanted to keep their relationship a secret. But they've decided they really don't care if everyone knows about them."

"Selena was focusing on getting herself back together and Abel was just getting out of a relationship, plus putting out his new album. Abel and Bella also were on and off towards the end of their relationship, so getting into something brand new was not what Abel was looking for," another added.

And The Weeknd - real name Abel Tesfaye - has reportedly had a crush on Selena for some time.

"Abel though always had a thing for Selena. He thinks she is extremely talented and sexy.

"They recently started talking before the holidays but she has been on his radar before. They are on the same level with expectations and think the other is really fun. They are taking things slow and getting to know each other."

The news of Bella's Instagram unfollow will come as a shock to fans as the model previously revealed she was on good terms with the 'Can't Feel My Face' hitmaker despite their split.

"There is no awkwardness. He is my best friend, and I am excited because I am walking during his performance."

With a source adding:

"Bella and The Weeknd have been talking again. The Weeknd sent Bella something special to her room to wish her luck on her big day. They are on great terms, not back together but still talking."