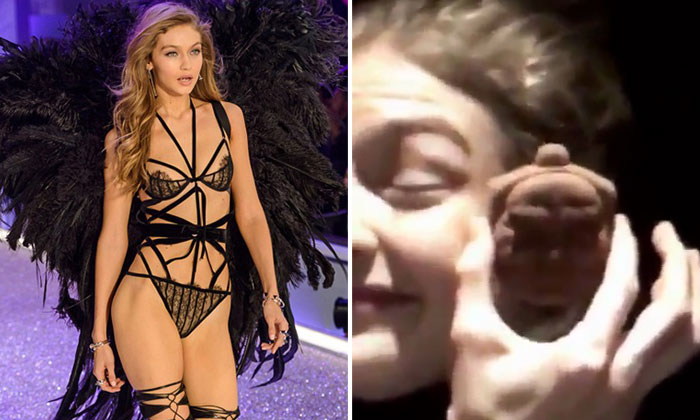 Maybe this is another reason why mothers tell you you shouldn't play with your food.

American model Gigi Hadid has come under fire over an online video that many deemed racist.

A now-deleted Snapchat clip posted by her sister Bella shows the 21-year-old at what looks like a dinner party, playing with a cookie in the image of a laughing Buddha.

In a moment of tomfoolery, she holds it up to her face, mimicking its expression, smiling and squinting her eyes.

this is y'all woke palestine queen? Gigi out here mocking Asian people. i would say she's cancelled but she never started. rat @GiGiHadid pic.twitter.com/b6wj5k1sXE

But netizens were having none of it.

The reproach came swiftly in a barrage of tweets, as followers accused the Victoria's Secret model, who is of Palestinian and Dutch descent, of being racist against Asians.

Even her boyfriend, former One Direction star Zayn Malik was not spared.

He was asked on Twitter how he felt as someone of Asian descent, about his girlfriend making fun of Asian people. The half-Pakistani singer cheekily replied: "Trust me... she likes Asians".

@KristopherRod trust me.. she likes asians ;)

Zayn subsequently had to defend himself against angry critics accusing him of being ignorant, alluding to his South-Asian heritage:

People's nerve to call me ignorant, when any chance they get I'm a terrorist!! to be a racist goes against my very existence..

So please don't try to educate me

But his followers made sure to give him an education, nevertheless:

@zaynmalik you are a POC who experiences racism but sometimes it seems that you're ignorant to other races, maybe not intentionally

@camhadid @zainzayns @GiGiHadid the problem is she tried to copy the Asian face thing while mocking an entire race for her own humour.

Gigi's mother, former model Yolanda Hadid, also weighed in on the issue, tweeting: "Only a toxic mind will perceive hugging a chocolate laughing Buddha as racist......"

This is not the first time the model has been criticised for being racist. According to Paper magazine, she wore an afro and darkened skin in 2015 for a Vogue Italia cover shoot and faced major backlash as well.

Related Stories
Rude uncle verbally attacks e-scooter rider and even tells her to 'go back to your country'
The worst excuse for racist behaviour has to be: "This Is Singapore"
'Stop asking me if I am Singaporean': Indian-Singaporean pens column about racism
entertainment
Gigi Hadid
model
racist
disrespectful
controversy