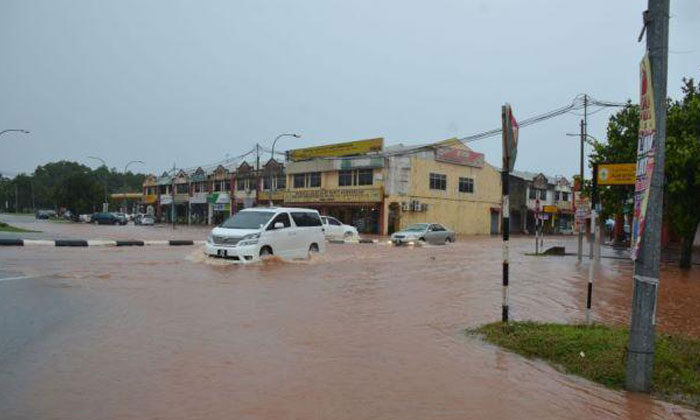 Floods have affected almost all the states in Malaysia, with thousands of people having to be evacuated to relief centres.

Johor residents are now re-living the floods of 2006 and 2011, which caused millions of ringgit in damage and brought communications to a standstill.

In Selangor, heavy rains since Monday evening displaced 152 residents from 45 families, who are now housed at two evacuation centres in Sabak Bernam.

In Malacca, the state activated its flood and disaster management committee following an incessant downpour for two days.

In Kota Baru, a total of 3,344 flood victims in Kelantan were sheltered at 24 evacuation centres in Kota Baru, Pasir Puteh, Pasir Mas and Kuala Krai.

Sungai Golok in Rantau Panjang is at 9.64m compared to 9.83m on Tuesday night - exceeding the 9m danger level.

In Kota Kinabalu, relief workers airlifted food and water to some 1,000 villagers trapped in Pitas district after access to their area was cut off.

Sabah Civil Defence Department director Kol Mulliada al-Hamdi Ladin said the residents from 10 villages decided to stay put when the floods started about four days ago as they believed that the weather would return to normal very soon.

"They did not think that the floods would go on for days and many have run out of supplies as they have no way to get to town to buy food and other essentials," said Kol Mulliada to the media yesterday.

In Miri, eight primary schools in Bintulu and Miri have remained closed since yesterday due to floods, affecting 460 pupils.

In Seremban, a school had to be shut down due to floods, said Deputy Education Minister Datuk Chong Sin Woon.

He said the access road to SJK(T) Ladang Bukit Kledek in Gemencheh, Tampin, was flooded, preventing the 17 pupils and 11 teachers from getting to school.

"They are temporarily carrying on with lessons at the nearby SK Air Kuning Selatan," he added.

In Kuantan, a family of six from Kampung Sungai Lik, Lipis, became the first flood victims in Pahang following heavy rain since Monday.

The water levels at major rivers in the state were also rising.

They arrived at the Kota Kecil relief centre here at about 12.15pm and mingled with victims and presented some aid items before leaving half an hour later.

Housewife G. Sevabakeyam, 38, who was among the aid recipients, expressed her appreciation to Raja Zarith and the Welfare Department for ensuring that basic necessities were available.

The mother of five, who has been living in Taman Aman here for the past seven years, said that she had already spent two nights with her family in the centre and hoped to return home soon.

"Flood waters rose to waist-level at around midnight on Monday and we were evacuated from our homes.

"We were already semi-prepared to leave as it was raining non-stop since the day before," she told The Star when met here on Wednesday.

Some 199 families received RM50 (S$16) worth of basic necessities, donated by various agencies and non-governmental organisations.

Meanwhile, Johor Health and Environment Committee chairman Datuk Ayub Rahmat said that the number of flood victims continued to rise, with 8,999 people involving 2,712 families in 76 relief centres statewide as of 10am Wednesday.