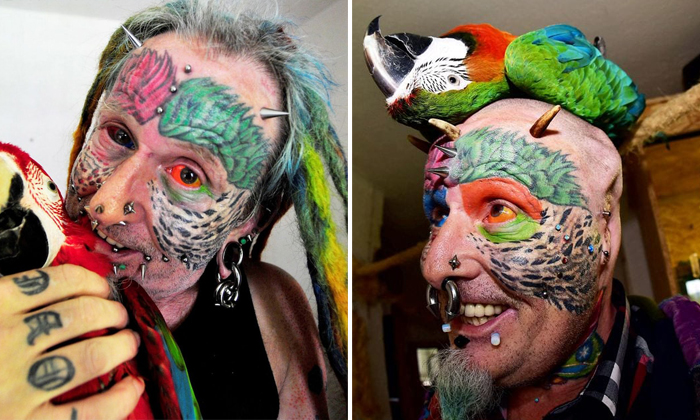 58-year-old Ted Parrotman (yes, that is his legal surname) has performed quite a list of body modifications over the years.

The current tally: 110 tattoos, 50 piercings, seven implants, three horns, dyed eyeballs, a magnet inside each of his hands, and a split tongue, Diply reports.

But the most extreme modification was his recent decision to have both ears removed.

Why? So he could more closely resemble his favourite animal, a parrot, of course.

The operation took six hours and he couldn't be more pleased with the results.

"I am so happy, it's unreal. I can't stop looking in the mirror," Ted added.

Ted is now looking for a surgeon to turn his nose into a beak.

"Obviously, I'm not going to look exactly like them.

"They have their eyes on the side of their head. But if I could have my eyes moved I would."

And while Ted has no contact with his parents or siblings and keeps few friends, he does have a girlfriend named Suzannah, who embraces his look.

"She loves it as she is into body modification as well. She is going to get a lot more done," said Ted.

Check out his stunning transformation in the gallery above and the video below.