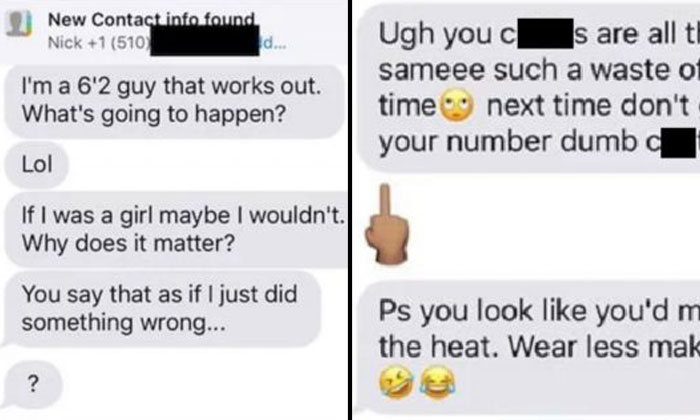 Tinder has banned a man named Nick Vedovi from using the app for life.

Kevin is a mutual acquaintance and stated on his post on Feb 27 that "the intent behind this post was to expose Nick for who he is, a racist misogynist. Since posting this, several women have revealed their own encounters with him and others like him."

The screenshots document Nick's racist rant towards Kevin's friend after she took 'too long' to reply to his direct messages.

He hurled racial slurs and abusive language at her and even insulted the amount of makeup she wears.

"We don't have to put up with this. We have to protect each other by calling these people out, even/especially if they are you friend, and showing that this behaviour will not be tolerated and will never be acceptable.

“Hey Nick (and anyone who behaves like you), we’re swiping you off the island. Tinder has a zero-tolerance policy on disrespect. No racist rants. No sexist pigs. No trolling. No jerks who can’t get over their own inadequacies long enough to have a decent conversation with another person on Tinder.

“I was personally offended by what you said. Your words to that woman were an assault, not only on her, but on all of us. Hate is not an option and we will continue to fight it wherever it rears its ugly head. You have a lot to learn, Nick. I see that you studied global business, and that you joined your school’s programs for young entrepreneurs and technology management. Great choices. Because you’ll need to search far and wide to find an organisation that will employ you now.”

Read snippets of the conversation in the gallery above.