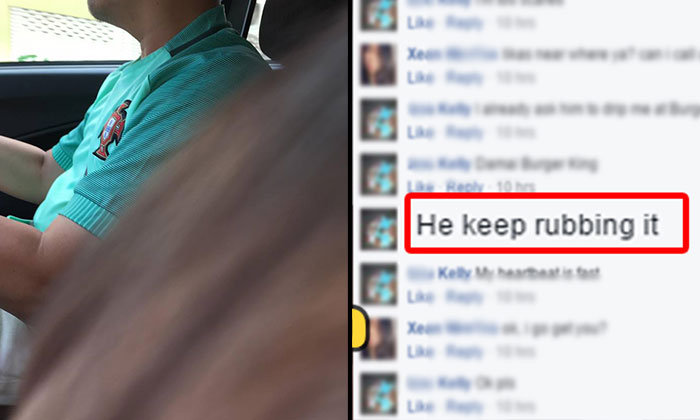 A Malaysian netizen, 25-year-old Kelly took to her Facebook account to recount her horrifying experience; A Uber driver had allegedly flashed her and rubbed his crotch suggestively during a trip from Hospital Likas back home in Sabah, Malaysia.

The posts which were uploaded on Monday (Feb 13) instantly became viral, reports The World of Buzz.

In her post, Kelly who claimed that she was allegedly carrying a baby and seated in the front passenger seat during the incident, wrote:

“During the first and second time, his hands were on the pants.

“I thought it’s because of his pants or belt was too tight.

“Then only I realised he was holding his penis for the third time when he took it out and rubbed it gently.

“I was so frightened and shaken by the incident that I cried silently without saying anything.”

She immediately posted about the situation on her Facebook page, prompting many of her friends and even members of the public to reach out to her to offer help.

Only after updating her status on Facebook did she drop a message to her husband for help.

“He called me and I tried to sound calm as I didn’t want the driver to suspect anything.”

She then apparently requested the driver to drop her off at a fast food restaurant, and a friend picked her up and sent her home.

However, many netizens have voiced their suspicions about Kelly’s sketchy story.

One netizen questioned why Kelly chose to be seated in the front seat when she was carrying a baby.

Another netizens voiced out:

“You mean to tell me she spent all the time texting on her phone instead of demanding that he (the driver) stop the car and let her out?”

Shortly after, all of Kelly’s posts were deleted, and in a shocking turn of events, it was reported that the 35-year-old Uber driver whom Kelly accused had lodged a police report.

“We have recorded his statement and he has also lodged a police report against the claims.”

The driver denied all allegations by Kelly and claimed that he did not even speak to her the entire journey.

The case is currently under investigation, and it remains to be seen who is telling the truth.