Malaysian couple loses utility bill and cash payment, receives letter from kind-hearted soul who picked it up and paid it for them 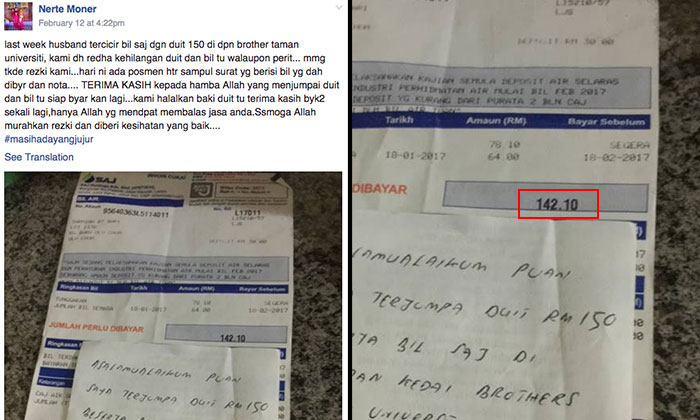 A couple from Skudai, Johor had misplaced their utility bill along with a RM150 (S$47) sum and were ready to give up hope of ever finding them back when they received a letter from an anonymous samaritan who found the lost articles and even helped them to pay it.

“Last week, my husband accidentally dropped the Syarikat Air Johor (SAJ) bill along with the RM150 in front of Taman University.

“We accepted the fact that the money and bill was lost even though it was tough to come to terms with it.

“We were really out of luck.”

However, they received a letter some time later, and to their surprise, the sender told them that he had picked up the items they lost and paid their bill for them, reports World of Buzz.

“Hi Madam, I found the RM150 and the bill in front of the Brothers Shop in Taman Universiti.

“I have paid for the water bill using RM143.

“As for the remaining RM7, I’ve used it to pump petrol and bought water.

“I hope you’ll forgive my impoliteness.”

Indeed, such an act of kindness, while small, can mean the world to people in need.