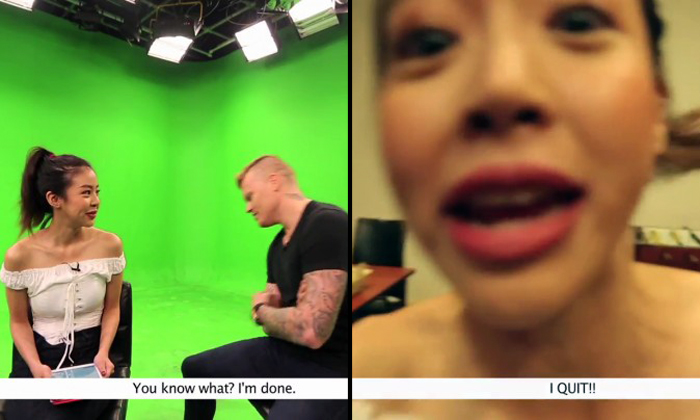 An Astro SuperSport TV presenter who thought she was pulling a prank on retired footballer John Arne Riise during an interview had the tables turned on her instead as it turned out the Liverpool legend was in on the joke from the start.

TV presenter Amanda Chaang pretended to be completely unprepared for the interview, and posed five seemingly offensive questions to Riise.

In the interview, Chaang pronounces Riise's name wrongly and calls him "Rise", refers to him as a "Manchester United legend" known for his "killer right foot" (Riise is famous for his left-footed piledrivers) and even asks if he will come to regret his "lame" tattoos.

Riise himself puts on a good act, and pretends to try to keep his temper in check and even makes a remark about "unprepared journalists" in one of his responses.

Chaang continues to ask if Riise is related to singer-songwriter Ed Sheeran due to their supposed resemblance.

However, the questions begin to get more "offensive" when the presenter asks him what it felt like to lift the Premier League trophy - which Riise never did and his former club Liverpool have yet to win.

She then asks if he intentionally scored the 95th-minute own goal in the 2008 Champions League semi-final against Chelsea, to which he replies it was "the worst moment for me when it comes to football".

He is seen grimacing and holding his head in his hands before one final question about being "best of friends" with Craig Bellamy (whom he had an infamous bust-up with involving a golf club) that makes him reach the "breaking point".

"You know what? I'm done," he says before "storming off" the set.

An extended version of the interview revealed how it all unfolded from the beginning.

It reveals how Riise was told about the prank by the production crew, who wanted to trick Chaang instead.

The extended clip also shows her profusely apologising to Riise backstage, when he confesses that he knew about what they were doing all along, to Chaang's great relief.

Before the release of the extended video clip, Chaang had been criticised by netizens for the "unprofessional" way she conducted the interview.

Subsequently, on Twitter, Riise himself clarified that it was all a big prank after many Malaysians apologised on behalf of Chaang.

"She wanted to prank me, but the producers and myself pranked her instead," he tweeted.

One thing: that Malaysian interview I did. It's all a big prank! She wanted to prank me, but the producers and myself pranked her instead

So enough abut the interview. She came running when I walked out, meaning we won the bet. I'm a great actor So it's all good Loved it