Ladies, please dress decently during Thaipusam in M'sia unless you want to be sprayed 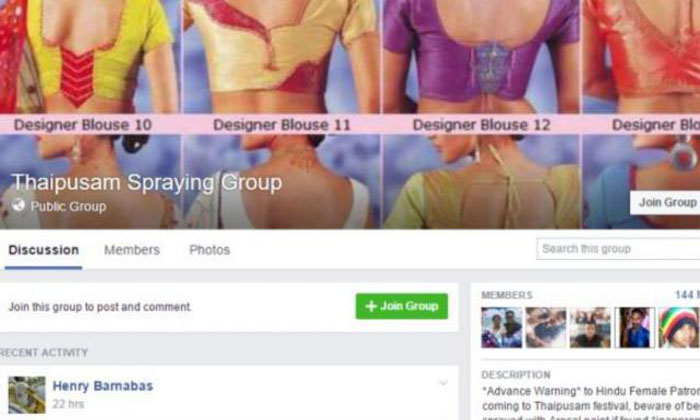 A Facebook group has warned Hindu women to expect being sprayed with paint should they be "inappropriately dressed" at Thaipusam events.

He pleaded for people to share their knowledge on the meaning of Thaipusam, saying people should be aware as to why rituals and cultures have to be protected.

The Karutthu Kannamaa group had earlier slammed the warning on dressing appropriately on Thaipusam.

"Why has religion reduced to what women wear all the time?

"Women's dressing is harmless - it doesn't disturb anyone, doesn't disrupt the rituals and doesn't impede devotion," the group said.

The post went viral with 1,418 shares since last Friday.

Facebook user Sasi Rekha Ravi called the directive "stupid" and men should "stay home instead of being a nuisance".

She asked if men should not turn up with funky hairstyles and colours as they are "not their culture".

Meanwhile, Khirthiga Khirthi questioned who gave the men the "rights to moral police others".

"This is wrong. Instead of buying spray cans, buy shawls for them to cover.

"Tell them not to wear such clothing in the future," said Juga Thayalan.

Thaipusam Task Force coordinator G. Gunaraj said it "will not condone such behaviour and will reach out to the police and enforcement officers."

"The task force will discuss on the best course of action and make a police report on this group.

"We will also reach out to the group and advise them against spray painting women.

"We will also be working together with local council enforcement officers and the police to monitor on Thaipusam day to see if anyone is carrying aerosol paint.

"There is a dress code that should be followed and we can only educate people to follow it. We can't force them and it is not right to do so," he said.

"Ladies should wear saree blouses that are not too revealing when they are visiting the temple.

"The group's intention to make women dress more appropriately is not wrong but they should not take such drastic measures.

"They should only advise women in an amicable manner," she said.

Malaysian politician Tan Sri Devaki Krishnan said men should be encouraged to be more respectful during the religious festivals.

"While women should dress appropriately during the festival, men should be respectful towards women as well," he said.