Kourtney Kardashian posts daring Snapchat of her in swimming pool 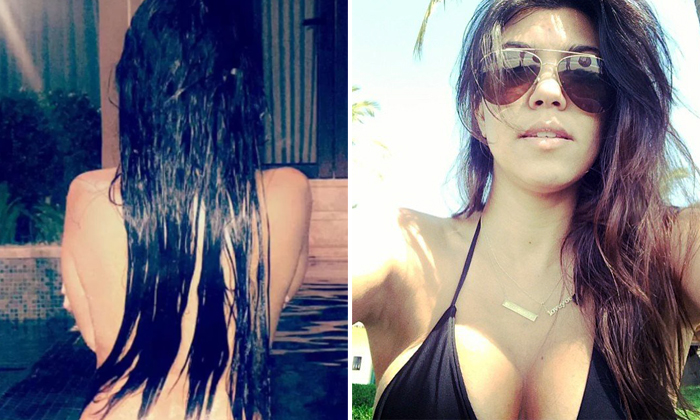 Kourtney Kardashian has posted a naked picture of herself on Snapchat.

The 37-year-old beauty gave her social media followers an eye-opening look into her family vacation in Costa Rica, where she has apparently been escaping her everyday stresses by swimming naked in a pool.

The mother-of-three has her back to the camera in the sultry snap, in which she has her arms folded across her chest while her dark locks cascade down her tanned back.

Kourtney is currently in Costa Rica with her three children - Mason, seven, Penelope, four, and her two-year-old son Reign - and her on-again off-again boyfriend Scott Disick.

Kourtney and Scott, 33, split in 2016 after she became frustrated with his party-loving lifestyle, but he has since made a concerted effort to win her back.

The reality star has managed to curb his drinking and become more self-disciplined as he's tried to convince Kourtney to rekindle their romance.

However, a source recently insisted Kourtney is happily single for the time being.

The insider explained: "Kourtney and Scott are not back together or even at the point of trying to make things work. Kourtney is happy being a parent right now and that is her number one interest right now.

"She's not interested in being in a relationship with anyone. [Kourtney and Scott] have a wonderful relationship and are doing an amazing job at being good friends for their kids. There is nothing more to it than that right now."

But Kourtney is pleased Scott has seemingly managed to fight his problems with alcohol.

The source said: "Scott is in a great place right now. He has toned down his partying and has done a really good job of staying in control. Everyone is really proud of Scott for sticking to his word and calming down."