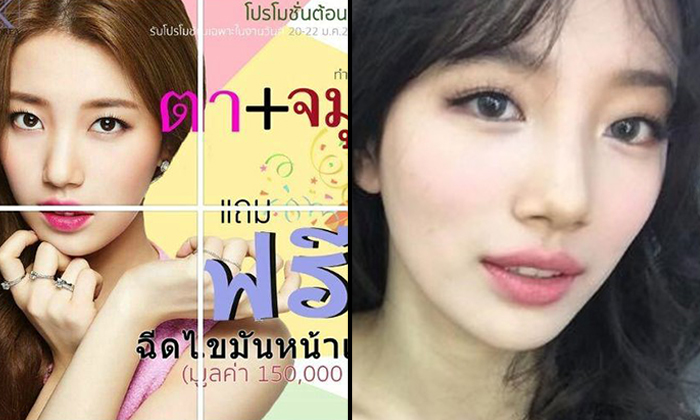 A Thai plastic surgery clinic has gotten into hot soup following allegations that it was using miss A’s Suzy’s photos in an advertisement without permission.

The advertisement in question allegedly featured Suzy, and further insinuated that the 22-year-old singer might have gone under the knife, with the copy reading below:

JYP Entertainment, the agency that manages miss A has issued an official statement, stating:

“Suzy has not made any deals with a plastic surgery agency.

“We are looking into the situation and discussing possible methods of retaliation.”

The image featured in the advertisement was lifted from an old Swarovski photo shoot, reports Koreaboo via AsiaOne.

Take a look at the advertisement in the gallery, which also features photos of other Korean idols.

Related Stories
Plastic surgery disaster, Photoshop masterpiece or doll-like beauty?
31 dramatic photos that show how plastic surgery can turn you from nobody to somebody
81 photos of plastic surgery in Korea that will make your jaw drop
plastic surgery
advertisement
korean idol
entertainment
miss A's Suzy illegally featured in Thai ad