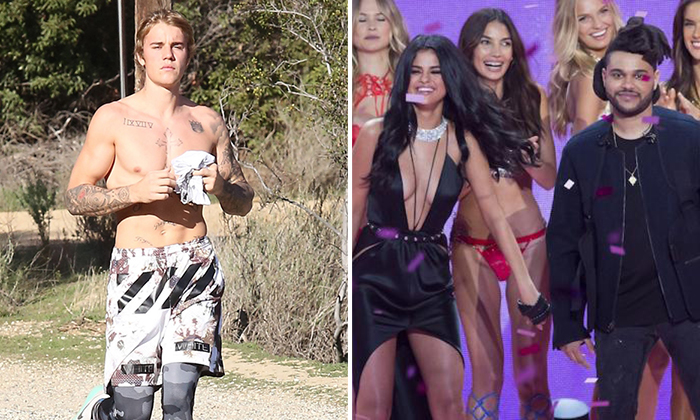 The 'Can't Feel My Face' hitmaker has been spotted romancing the 22-year-old pop megastar's ex-girlfriend Selena Gomez in recent weeks, and it seems the 'Love Yourself' singer has hit back at their budding relationship as he slammed The Weeknd's music.

Asked by TMZ.com if he listens to The Weeknd's music, Justin said: "Hell no I can't listen to a Weeknd song! That s**t's wack."

It isn't the first time Justin has reportedly slammed his ex-lover's new relationship either, as TMZ previously reported he believes the 'Hands To Myself' hitmaker is just using The Weeknd - real name Abel Tesfaye - to boost record sales.

According to the publication, Justin thinks the supposed relationship is a strategic move on the part of the 24-year-old beauty - who has previously dated Nick Jonas, Zedd and himself in the weeks before releasing new material - as she is currently working on new material with the 'Starboy' musician.

And it isn't just the 'Sorry' singer who is upset about Selena's relationship with 26-year-old Abel, as the news of their romance caused Abel's ex-girlfriend Bella Hadid - who, along with Selena, is a member of Taylor Swift's squad - to unfollow the brunette beauty on Instagram.

One source said: "Selena was always the girl who stayed away from a lot of the Taylor Swift crew, except for Taylor. She preferred to be one-on-one with Taylor and didn't like being a part of the whole squad thing."

Another insider stressed that because Selena is not especially close to Bella or her sister Gigi Hadid, her new relationship is not a big issue.

The source said: "Selena is not good friends with either Gigi or Bella. She knows them through other people, but they are just acquaintances.

"She is friendly with them, but not friends with them ... Selena and Gigi were never fond of each other, so Selena definitely doesn't have any stipulations about hooking up with or dating Bella's ex."