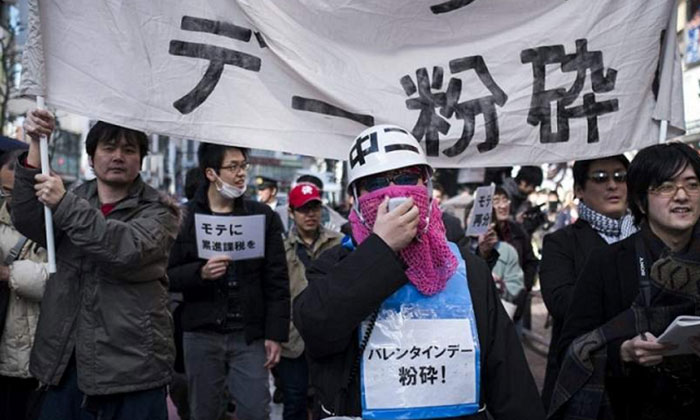 While many lovebirds were out celebrating Valentine’s Day yesterday (Feb 14), one group of men had a very different idea in mind -- staging a protest to reject the day itself.

The group, known as ‘Kakuhido’ or ‘Revolutionary Alliance of Men’ started their protest in Shibuya, holding banners that read, ‘smash Valentine’s Day’, while chanting phrases such as ‘public display of affections is terrorism’, reports The World of Buzz.

According to a member from the group, the Kakuhido, formed more than 10 years ago in 2006 by Katsuhiro Furusawa who had started it after his girlfriend dumped him, sought to put an end to Valentine’s Day because they deemed it to be commercialism and capitalism.

A spokesperson for the group, 33 year-old Takayuki Akimoto said:

“Our aim is to crush this love capitalism.

“People like us who don’t seek value in love are being oppressed by society.

“It’s a conspiracy by people who think unattractive guys are inferior, or losers.

"Acts like cuddling in public, it makes us feel bad.

“Our aim is to crush this love capitalism.

“People like us who don’t seek value in love are being oppressed by society.”