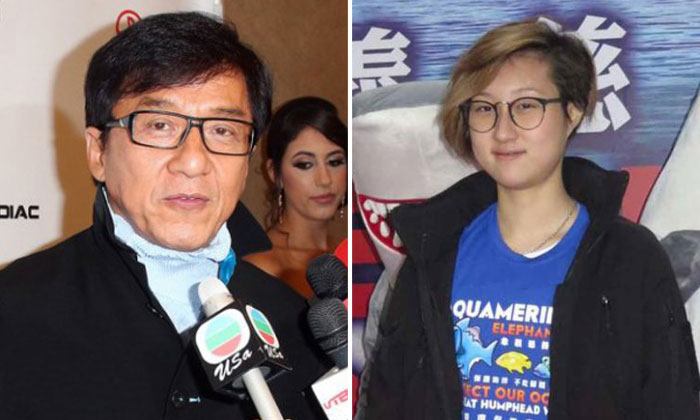 Jackie Chan's daughter, Etta Ng, was admitted to a hospital in Hong Kong, according to online reports, with rumours swirling that the teenager may have attempted suicide.

Her mother, former beauty queen Elaine Ng, rushed to the hospital after hearing the news. But when asked about Etta's condition, she merely sighed and muttered an apology, Hong Kong's Oriental Daily reported.

Elaine later confirmed over a phone interview that her daughter was in hospital, but said that they would have to wait for the doctor's report for more details.

According to Apple Daily, 17-year-old Etta had left for Thailand for a holiday with her mother's friends on Friday (Mar 31). However, she cut short her trip and secretly returned to Hong Kong two days later, and checked in to a hospital immediately after landing.

There is speculation that Etta may have been emotionally distressed and hurt herself, Oriental Daily reported.

Meanwhile, some netizens pointed out that the troubled teen had shared articles and discussed suicide on social media last year, according to news website Ming Pao.

Prior to the trip, she had posted a status on Facebook, where she wrote: "Leaving HK for a bit tomorrow. I'm still alive, for those who are wondering."

The relationship between mother and daughter has been strained in recent weeks. 44-year-old Elaine was detained by Hong Kong police for criminal intimidation, reportedly following a dispute about Etta's friends.

Following the arrest, Elaine said that she had quarrelled with Etta because she saw a packet of sedatives in her daughter's room. She also wept at a press conference on March 30, and asked her daughter to come home.

It was the second time that Elaine has been arrested, following an incident in 2015 when Etta accused her of physical abuse.

Etta was born in 1999, following a relationship between Elaine and screen legend Jackie Chan. She was raised in Shanghai, before returning to Hong Kong with her mother in 2011.

In 2015, she spoke up about Chan for the first time in an interview with a magazine, describing the action star as "just a stranger" and saying that "he is just my biological father".