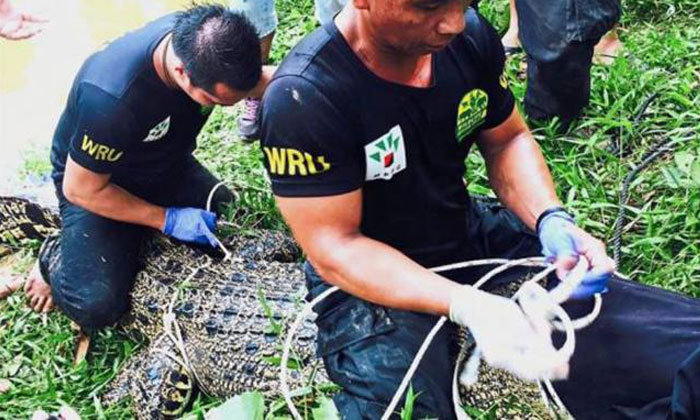 A 3.2m-long crocodile has been captured in a village in Penampang. It has been described by wildlife rangers as the largest captured in the district so far.

The reptile was caught in a trap set up near Kampung Ramayah yesterday, state Wildlife Department director Augustine Tuuga said.

He said he had ordered the trap to be set up after villagers alerted the rangers about the presence of the crocodile at Sungai Togop, a tributary of the Sungai Petagas.

The department's assistant director Dr Sen Nathan said the villagers reported that the crocodile has been living there for several months.

"And they saw that it was getting bigger and dangerous. Their dogs were also eaten by the reptile," he added.

He said the capture was the latest in a series of crocodiles caught near populated areas over the past six years.

"We are seeing a drastic increase in reports of crocodile sightings in river systems as well as cases of human-crocodile conflicts throughout Sabah in most of the rivers and other waterways," Dr Sen added.

He said the department rangers had caught 75 crocodiles between 2010 and 2016 near populated areas.

The reptiles were re-located to forest reserves and other conservation areas.

"The probable reason for the increase in crocodile population is that they have been protected for the past 30 years and no hunting permits were given out," he added.

Wildlife Rescue Unit assistant manager Dr Diana Ramirez said the crocodile called "Olog-Olog" by the villagers would be kept temporarily at the department's Wildlife Holding and Rescue Centre until it is released into an isolated river far from villages or human settlements.