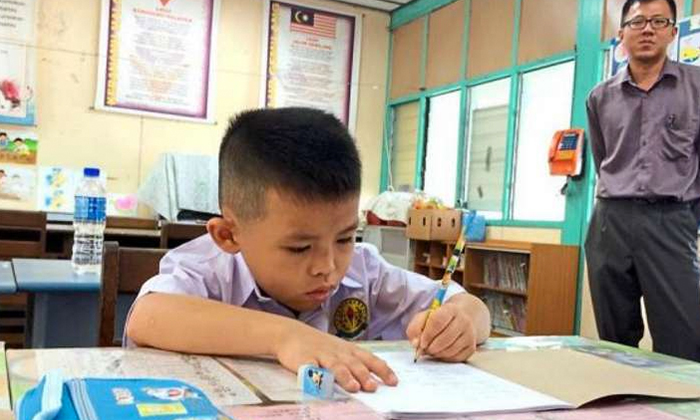 Parents tend to tell their children to study hard or risk falling to the bottom of the academic ranks in school.

But for one boy, Oon Sheng Juin, this isn’t a problem; in fact, he ranks both the first and last in class and school alike.

Juin is the only student enrolled at SJK (C) Aik Hua school, as a result of an urban migration scheme.

Despite being alone, the Year One student, the equivalent to that of a Primary One student in Singapore,  was unfazed and happily learnt from his teacher, 35-year-old Tan Boon Lin  even on his first day.

When asked by reporters whether he was all right studying alone, the student nodded coyly.

“The boy is quite a fast learner.

“"He only attended kindergarten in Penang for several months before coming here.

“He can't write well but is picking it up.”

Sheng Juin and his younger sister had moved to his grandmother’s place, a fishing village with about 50 villagers in Pasir Hitam, Kedah recently.

She had thought that the school would close due to the lack of students.

“We have also obtained a letter from the district Education Department to continue the classes.

"The villagers also hoped the school could remain open.

“"One of them said he will register with the school once his child is old enough.

Ms Hee had also said that a philanthropist had pledged to sponsor three pupils to study there, to keep the school in operation.

"The Tan Sri said he would also sponsor RM500 (S$165) monthly to anyone who sends their children here.

"There used to be five pupils in 2013 but the numbers continued to decrease.”

According to her, there were two Year Six students in the school last year but the numbers had been dwindling.

He clarified that Sheng Juin would continue to study there for the time being.