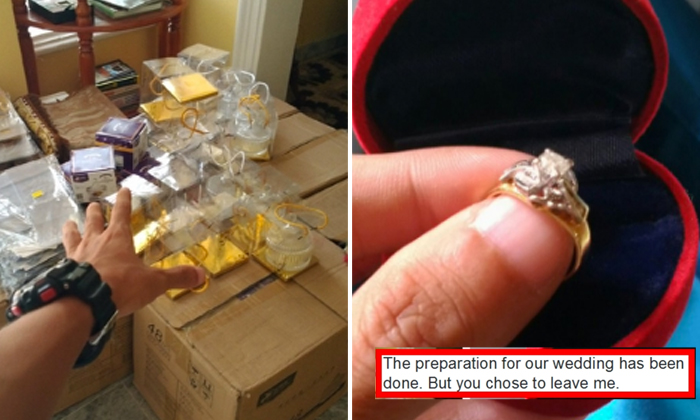 A Malaysian man, Ezrin, was left devastated when his bride-to-be decided to leave him 21 days prior to their wedding ceremony.

The heartbroken man subsequently posted photos of the wedding preparations on his Twitter which have gone viral, reports World of Buzz.

“I’ve wasted effort in keeping the relationship alive all this time, yet you chose to leave me, less than a month from our wedding.

In another posting, Ezrin uploaded a photo of items and cardboard boxes, along with the caption:

“The preparation for our wedding has been completed, yet you chose to leave me.

“Here are all the wedding goodies meant for our wedding.”

However, some netizens have questioned the validity of Ezrin claim.

“We shouldn't come to a conclusion just yet.

“We don’t know what happened on the fiancee’s side.”

Related Stories
Gamer bride refuses to take part in her wedding -- because she wants to play League Of Legends
I do, but hold on: Groom leaves bride standing at altar after 'forgetting wedding rings'
UK newlyweds receive wedding photos -- along with horrible disappointment
tragic
bride runs away
groom
groom-to-be posts photos of wedding preparations after fiancee leaves him