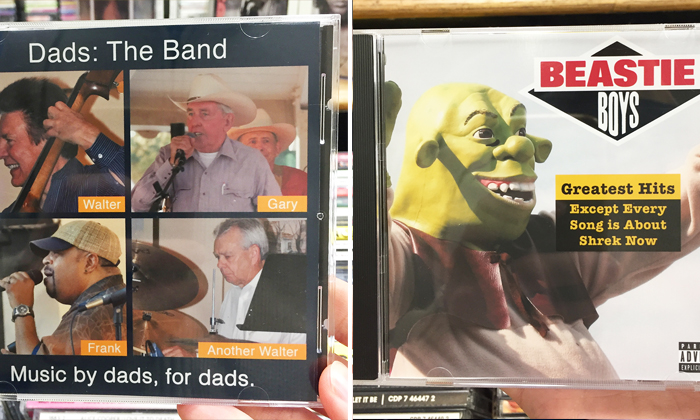 One very creative man decide that his local music store was not cool enough, so he did something about it.

Comedian Jeff Wysaski has a hobby which involves making fake signage, CDs, and posting the pictures of his shenanigans on the internet for people to laugh at, Tone Deaf and Imgur report.

Perhaps his best plant to date is sneaking a bunch of fake CDs with hilarious, dubious titles such as Frank Sinatra Makes 23 Train Noises, Dads: The Band – Music By Dads For Dads, and Songs To Drive Off A Cliff To Volume 3, into a Los Angeles music store.

Best of all, when you open each CD case, there is a sign which reads:

“Sorry this album does not exist. Here is a different one instead”, under which is a copy of a Wilson Phillips album.

Truly, Jeff is nothing but a treble (trouble)-maker.