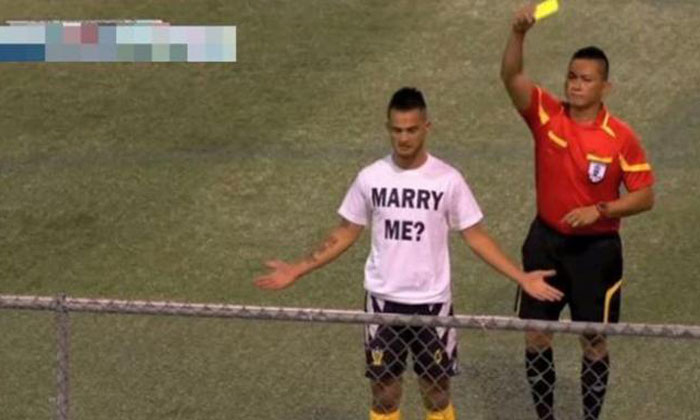 A football player from Guam was booked after he celebrated a stellar bicycle kick goal by proposing to his girlfriend.

Yup, he proposed to his girlfriend on the pitch -- how cute right!?

Napa Rovers player Ashton Surber had run to the side of the pitch, opening his jersey to reveal a shirt with the message "Marry Me" shirt after scoring the goal against Guam Shipyard during the Guam Premier Division last week, reported The Star.

And as if right on cue, the referee showed Surber the yellow card just as he gets down on one knee to propose.

Surber then pointed to his girlfriend who was seated in the stands.

Unfortunately, according to FIFA regulations, a player who removes his jersey after scoring a goal is considered to possess unsporting behaviour.

Besides winning the game 5-1 and going top of Guam's top division, reports say that Surber's girlfriend said yes to his proposal.

Well, at least it was a happy ending afterall.

Related Stories
S'pore man plans proper proposal to Chinese wife who he was matchmade 1 year with
Little boy proposes to his classmate... with his mum's diamond ring
Chinese guy sets up candlelight proposal for girl but campus security takes him away before she arrives
Football
proposal
romance
love
couple
relationship
Unsual