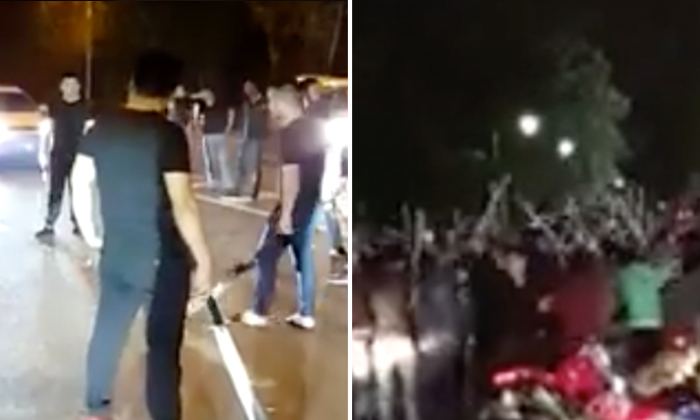 A Facebook user, Dasarathar upload several photos and a video recently, showing what was seemingly a clash between gang members yielding weapons, including machetes and baseball bats.

According to him, the ancient happened last Friday (Mar 3) near Ulu Tiram, Johor, in Malaysia and started apparently when members of the infamous Gang 360 clashed against members of a rival gang, reports The Coverage.

Said Dasarathar who claimed to be from Gang 360:

“When you are in a gang, you have to go through this.

“It doesn’t matter if the members from an opposing gang are still alive or not.

“As long as you are in gang, you and your gang have to live.

“When you are in a fight or in any kind of trouble, your brothers all be there for you.

“My brothers will always be there for me.

Some netizens commented that the footage might be fake and the incident was staged, due to the lack of blood.

The nature of the incident cannot be ascertained at the moment.

Watch the video below and decide for yourself.

Related Stories
7 arrested after shouting gang-related slogans during funeral: Video shows them shouting '369' near Kim Tian Rd
Group of men whack and rain kicks on guy at AMK -- even when he is motionless on the ground
Two men allegedly attacked by group with bicycle chains and defended themselves at Boat Quay -- but things got messier
gang
fight
weapons
Malaysia