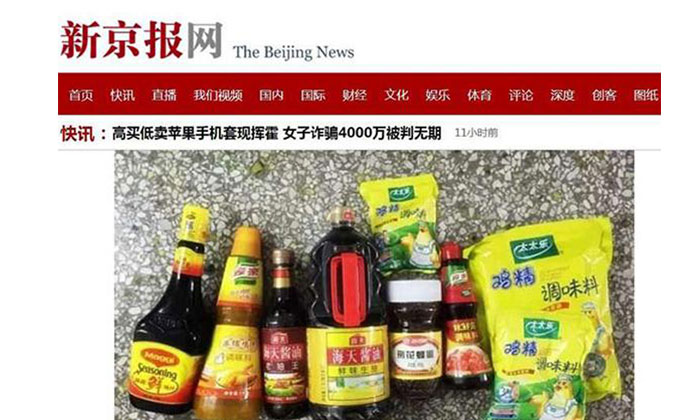 Officers from China's Ministry of Public Security (MPS) have detained seven people in connection with another fake food scandal in China's northern Tianjin municipality. Those detained were involved in a large-scale operation with nearly 50 factories which allegedly manufactured fake versions of widely used food seasonings and sauces.

Factories in Jinghai district were allegedly passing off counterfeit versions of popular food seasonings and sauces by pasting fake labels of brands such as Maggi, Knorr, Nestle and Lee Kum Kee, said The Beijing News on Monday (Jan 16).

Authorities were operating off a whistleblower's tip-off.

The factories, which allegedly have been making fake foods for more than 10 years, manufactured 500,000 yuan (S$103,000) worth of fake goods daily.

The investigation found that the factories' concoctions included ingredients such as industrial salt, food colouring, food additives and tap water for what passed off as "soya sauce".

Some of the ingredients used, such as sodium benzoate, may cause cancer.

Labels of known brand names were pasted on the fake seasonings and sauces, and shipped to areas including Beijing, Shanghai, Anhui, Jiangxi, Fujian, Guangdong, Sichuan and more areas in China.

Jinghai district secretary Mr Ji Guoqiang told The Beijing News that the government would get to the bottom of the fake seasoning scandal and deal severely with any government officials found associated with it.