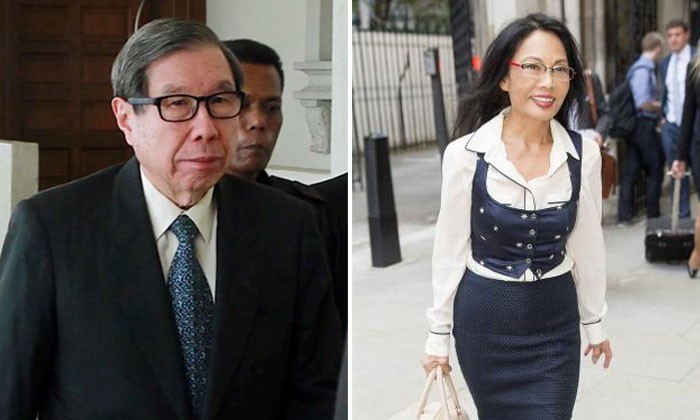 Malaysian tycoon Khoo Kay Peng, who owns the Laura Ashley brand, has been ordered by a British court to pay £64 million (S$112 million) to his former wife as settlement for their divorce in a long-running row.

Judge David Bodey said in his ruling on Friday (April 7) that Chai should receive the divorce settlement in the form of both cash and property, the Guardian reported. The judge's detailed judgment on how the matrimonial assets would be split is expected to be released soon, said the report.

"I just want to thank my superb legal team ," Chai said in an e-mailed statement to Malay Mail Online after the court ruling.

Her lawyer Ayesha Vardag said in the same statement: "This litigation has been long and arduous. It is a journey which has now ended in the affirmation of the principle of fair sharing. It emphasises that there is no place in England for discrimination between home maker and bread winner."

Chai, who was crowned Miss Malaysia in 1969, had sought £100m from the 78-year-old tycoon following their split after 42 years of marriage. She claimed their assets were worth at least £205m. The 68-year-old said she had contributed to her ex-husband's success by being a "traditional" wife, and that they had made a sharing agreement entitling her to half of the family wealth.

"I looked at marriage in the traditional way," Chai had told Justice Bodey at hearings in the family division of the high court in London. "He is the breadwinner and I stayed at home and looked after the children. It was a daunting task."

Khoo, who owns 44 per cent of Laura Ashley Holdings, argued that his former wife should only receive £9m, the Guardian reported.

The two married in 1970 and had five children before splitting in 2012 and have spent more than £6m between them on lawyers to fight their financial dispute, according to the Guardian.

In 2014, Chai gained the upper hand in the divorce battle after London's High Court ruled it could hear the case.

In January 2016, a London court granted a preliminary divorce decree to Chai, which entailed she would be entitled to half of Khoo's fortune once the marriage was officially dissolved.