Dakota Johnson on nude scenes with Jamie Dornan: 'There were no inhibitions, and it was very honest' 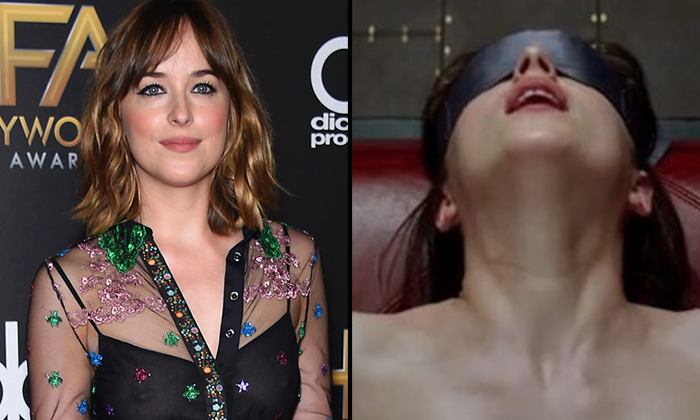 The 27-year-old actress had to strip off for a number of scenes in the 'Fifty Shades' film series but says it was much easier doing them with Jamie because they had worked so "incredibly closely".

She said: "Nudity is really interesting for an actor. Jamie and I worked so incredibly closely for so long. There were no inhibitions, and it was very honest, very trusting. But I mean, what a gamble! What if he had turned out to be a total d**k?

"There's no makeup. There are no clothes to tell you a bit about the story. There's no jewelry to give you a clue about social status. So it becomes purely about the performance."

And the 'How To Be Single' star hasn't ruled out stripping off for films in the future as she feels it is more "honest" to get naked for a sex scene.

She added: "Will I stop doing nude scenes when my boobs start sagging? I don't know. Maybe I have more of a European mind-set about these things.

"I don't want to see someone wearing a bra and underwear in a sex scene. Let's be honest about it. People are naked when they f**k."

When the first instalment of 'Fifty Shades' was released, it was met by its fair share of both bad and good reviews but Dakota is "truly proud" of what she and Jamie helped create.

She shared: "I'm truly proud of it. It's a cool story, and I think it's different, and different is what I'm about."

The brunette beauty also poured cold water on the rumours she and Jamie, 34, aren't good friends.

She quipped to the February issue of Vogue magazine: "We hate each other and we're having an affair, so everybody's right. How about that?"