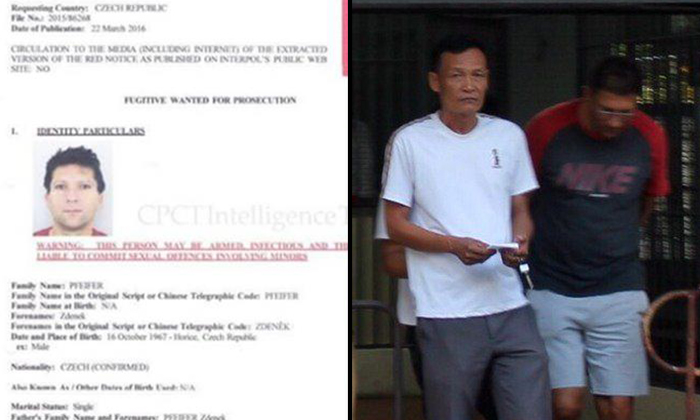 A wanted Czech fugitive, 49-year-old Zdenek Pfeifer who knowingly infected more than 17 victims, both Czech and Thais, with HIV and escaped to Thailand has been deported.

He is understood to have overstayed for a year and a half past his visa, which expired in Aug 5, 2015, reports Coconut Bangkok.

Pfeifer is wanted by Interpol for sexual offences with minors and the intentional spread of his HIV infection, who had unprotected intercourse with both men and women who were unaware of his HIV-positive status.

The fugitive was arrested at his rented apartment in Bang Tao, Phuket after a nationwide manhunt was ordered by deputy national police chief general Wuthi Liptapanlop.

He was  handed to Czech officials on Jan 17.

Under the “Good guys in, bad guys out” campaign started in 2014 by the Thai Immigration Bureau which aims to extradite undesirables from Thailand, Pfeiffer should have been fined at least THB20,000 and banned from Thailand for 10 years, as opposed to his sentence.

So far, Thai officials have been tight lipped about the sentence and Immigration Chief Colonel Kantawat Pongsatanbordee said: