Citilink pilot fired after allegedly showing up drunk for flight in Indonesia: Video shows him stumbling and dropping things 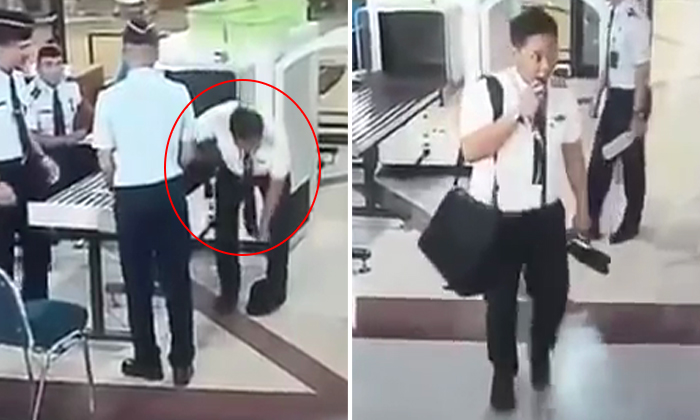 A Citilink pilot was investigated and fired after a video showing him showing up for a flight while allegedly drunk went viral online.

The clip, which has been circulating on numerous websites and Stomper Edwin shared with Stomp, shows Captain Tekad Purna, who was wearing shades, checking in at the airport.

He can be seen stumbling around as well as dropping his belongings multiple times, which security officers had to help him pick up more than once.

A report from the Transportation Ministry stated that passengers were initially baffled by an unclear announcement from Tekad, raising suspicion that he was drunk.

This led to several passengers disembarking from the plane soon after, with nine of them cancelling their flights.

Citilink said in a statement, "We want to apologize for the delay and the discomfort of the passengers of Citilink Indonesia QG 800 on Dec. 28."

According to the airline, Tekad's initial drug and alcohol test came up negative, but he would undergo further examination. The final results of the medical check will be issued in a week.

The flight's pilot was eventually replaced and it departed an hour behind schedule, with 154 passengers on board.

The same day, Citilink announced that Tekad had been fired for "breaching procedures, a violation that can endanger the lives of passengers".

On Friday (Jan 30), two of Citilink's top executives, president director Albert Burhan and operational director Hadinoto Soedigno, announced on Friday their resignation as a gesture of responsibility for the incident.