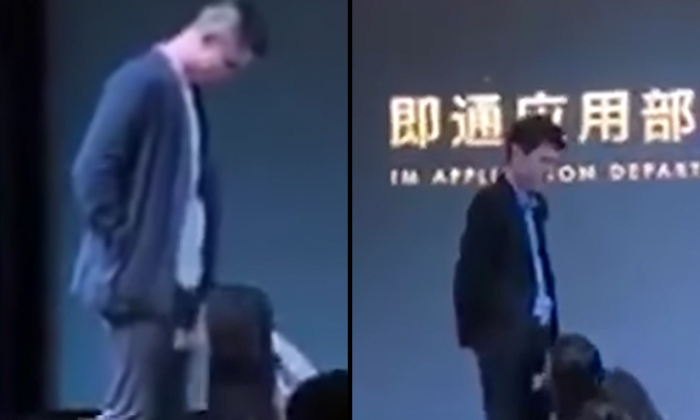 Chinese netizens have taken umbrage at Chinese internet company Tencent’s tasteless game at a company year-end party -- making female employees open a bottle of water wedged between their male colleagues’ legs, using nothing but their mouths, while their co-workers cheered them on.

The internet giant is now facing a major public backlash after a 7-second long video of the game leaked online, showing a fair of female workers on their knees in front of male colleagues on stage and participating in the lewd game, reports Shanghaiist.

Many of the netizens have likened the gesture to oral sex, and slammed Tencent for their carless and artless planning.

One Weibo user even commented:

“How could a company treat its workers this way?

“Do they not have any sense of decency?”

Another  attributed blame on the women themselves, adding:

“Why would these women allow themselves to be shame in this manner?

“What would their fathers say?”

However, some Weibo users have defended the women:

“If they don't do this, then they would be out of job.

“We must change this kind of disgraceful male chauvinistic culture!”

After the incident, Tencent released a statement, apologising for the game, and blamed the incident on poor oversight, promising that it would not happen again.

It also promised that the workers who were responsible would be punished with ‘demerits’ on their records.