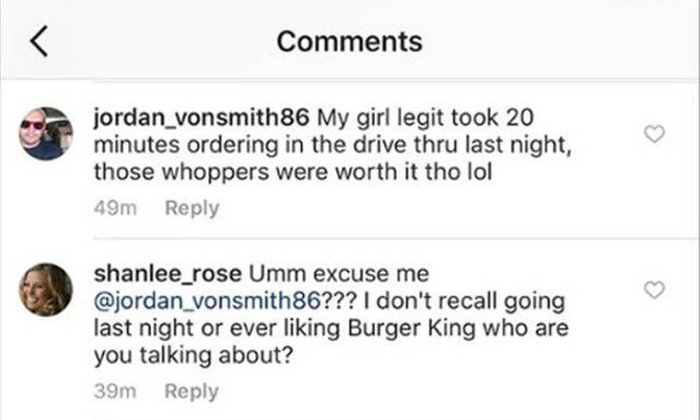 What started out as a comment lamenting about the long wait at Burger King's drive-thru led to a breakup witnessed by thousands of Instagram users.

User @jordan_vonsmith86 had apparently commented on a @burgerking post, "My girl legit took 20 minutes ordering in the drive-thru last night, those whoppers were worth it tho lol".

This led to some confusion for his girlfriend @shanlee_rose, who responded on the thread that she did not recall visiting the fast food restaurant or even liking it.

She also tagged two of her friends in the post, one of whom said that she "knew it" while the other replied, "Told you I saw him with a girl at Rogue One" -- which implied that they had been aware of Jordan cheating on Rose for some time.

The conversation soon 'exploded', with the 'other girl' whom Jordan had visited Burger King with responding as well.

It eventually ended with Rose pretty much telling Jordan that he has been dumped.

One netizen wrote, "Did I seriously just witness a breakup on BK's Instagram?"

Well, Jordan, we sure hope those whoppers were worth it.

Check out screenshots of the full conversation in the gallery above.