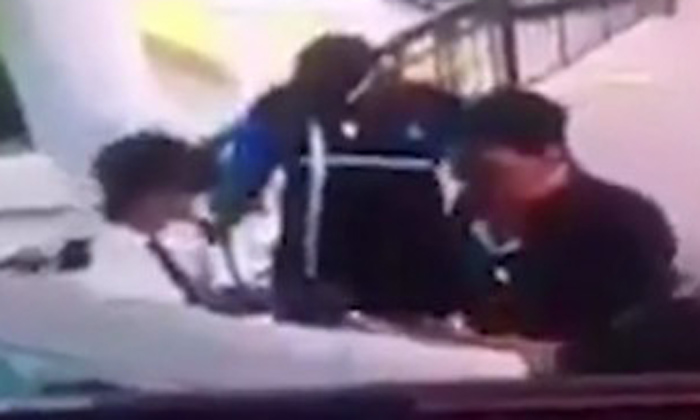 Three men were captured on video roughing up a security guard at a condominium guardhouse in Ampang, Malaysia.

It is not known if the men were among those who beat up a lorry driver at a condominium in Bukit Antarabangsa, Ampang, on Jan 14.

But footage of the two incidents have some similarities, namely a light-coloured car parked in front of a metal barrier, next to a yellow road divider.

The 56-second clip, which was shared via Twitter on Sunday night, showed the men speaking to the security guard and gesturing angrily at him.

One man in a blue shirt, cap and sunglasses was seen grabbing the security guard by his shirt to drag him out of the guardhouse.

He then kicked the guard in the leg and shoved him, reports The Star.

In the Jan 14 incident, lorry driver Nasrul Faiz Zulfahmi was brutally assaulted at the condominium after he accidentally backed into a Mercedes Benz that was parked close behind his lorry.

The impact caused the car's number plate to fall off and left the car with a few scratches.

The 25-year-old was then kicked and assaulted by several men, leaving him with bruises on several parts of his body and a gash on his neck that required 13 stitches.

The attackers were also seen warning the condominium's security guards who tried to intervene.

Footage of the attack has since gone viral.

It was apparently filmed from a condominium unit overlooking the scene.

Five suspects, including a woman, in their 20s and 30s, were detained on Sunday in Kepong, Kajang and Negri Sembilan over the assault.

They have been remanded for four days, police said.

Related Stories
Man dents more than 10 cars, kicks down 4 motorcycles in Serangoon carpark
Another shocking attack caught on camera: Man gets whacked by pole as he tries to defend himself and plead for mercy
Man spits at Stomper and his GF for no reason -- then punches him and leaves him bleeding
violence
assault
Malaysia