Can you stomach this? Bread laced with cockroaches might just be mankind's food of the future 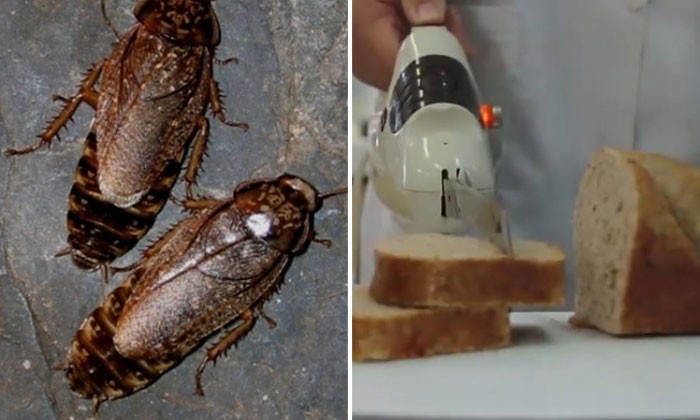 Looking for an easy and affordable way to get a high protein diet? Cockroach-laced bread may be the answer for those who can handle the crunch.

Instead of chasing away pesky cockroaches from your food, this time, researchers want you to ADD them into your food - yes, that's right. Get those critters into your meal.

And it's not just any cockroach. Researchers say they are using a "special cockroach". Its scientific name is Nauphoeta cinerea, commonly known as the lobster roach.

Lobster roaches are typically bred in captivity and also kept as - gulp - pets.

"A lot of care is put into what they eat, (as) they only eat fruits and vegetables," said Ms Lauren Mengon from Federal University of Rio Grande.

Brazilian researchers from the university are experimenting with using a combination of cockroach-based flour and regular flour to bake bread. The cockroaches are ground into powdered bits and added into a flour mixture, kneaded and then popped into the oven to form a loaf of bread.

Before you dismiss the researchers as being mad scientists or wild cooks, there are some pretty good reasons why they reckon that cockroaches may save humanity.

According to a report released by the UN's Food and Agriculture Organisation in 2013, insect-based produce is a sustainable way to tackle pollution and famine, with insect-breeding producing far less waste than animal breeding.

"Insects don't create waste. If we think of the amount of water we need to breed an insect, compared to the amount of it needed for cattle breeding, it's infinitely less," said Ms Myrian Melado, Federal University of Rio Grande researcher.

Also, cockroaches "take less time to grow," explained Ms Melado, with the Cinerea cockroach used in the flour taking only 75 days to grow until being fully harvestable.

The researchers hope to turn their study into a business project, being able one day to produce bread, energy bars and many other cockroach flour-based foods.

"They remind us of chesnut or peanut. They're really good and tasty, and (their presence) does not affect the favour of the bread," said Ms Melado.

Erm, thanks. But no thanks. I'll be sticking to granola bars for now.

Related Stories
Will you do this for your friend? Malaysian wedding game requires groomsmen to swallow live worms
Indian woman rushed to hospital after experiencing abdominal pain -- only for doctors to find 150 worms inside her stomach
cockroach
science
insect
food
unusual
disgusting